Checking in on upcoming opponents

Share All sharing options for: Checking in on upcoming opponents

With a handful of non-conference opponents who most of are not very familiar with on the schedule, now might be a good time to check in on some of our upcoming opponents... 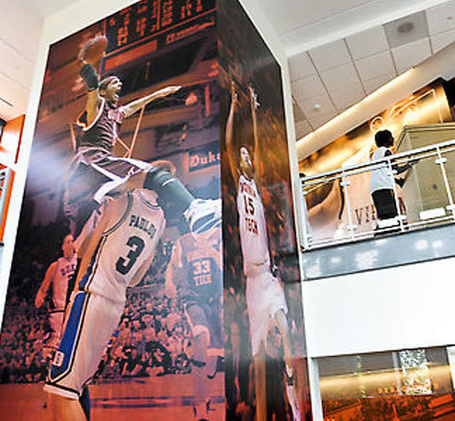 Syracuse - opened camp yesterday and all eyes were on Greg Paulus (the white guy in the picture on the right). Paulus, after flirting with several other schools, transferred to Syracuse to play one season of football.  He was highly recruited out of high school but chose to play basketball at Duke (again, pictured right).

Paulus will be battling with redshirt freshman, Ryan Nassib for the starting job as Syracuse rebuilds.

"I have no problem at all with the coach putting the best player out there, no matter who it is," Nassib said. "It doesn't matter if they brought Brett Favre in here. I'm just taking it like it's another recruit coming in. It's more competition for the position. That's kind of how football goes, you know what I mean? Kids come in and compete for the same position."

From the Gopher perspective we will either be facing a redshirt freshman in his second game as a D1 starter, or we'll be facing a fifth year senior who hasn't thrown a football in five years.  Win-Win-Win!

Air Force - the most important news is that sophomore sensation Tim Jefferson is back with the team after taking the spring to concentrate on academics.  Jefferson is competing to get his starting QB job back, but nothing will be handed to him...

"We'll probably have three players or maybe even four who will divide the reps at quarterback," Calhoun said. "Jefferson's in our plans, but for the first couple of weeks we want a bunch of players involved at every position."

If anybody were to unseat Jefferson, who started games six through 12 as a true freshman last year, it will likely be Asher Clark who was the starting tailback a year ago.  In the Air Force, option offense having a high school QB, turned RB probably isn't a terrible scenario.

Calhoun indicated that if Clark wins the battle at quarterback, he would look for another position for Jefferson to play in hopes of having his best players on the field.

"Everybody's fighting for a job," Jefferson said. "No one is set on the depth chart right now. Connor (sophomore Connor Dietz) and I took most of the snaps at quarterback. Asher took snaps at both quarterback and tailback."

Calhoun hasn't ruled out Clark playing both positions in one game.

It should be interesting to see how this plays out and what the Falcon backfield will look like on Sept. 12th.

Cal - the final non-conference game before we head to Northwestern for some Big Ten action.  The one to always pay attention to is Jahvid Best.  The Heisman candidate is described here as "a human blur who won the state 100-meter title as a high school senior and now routinely zooms past Pac-10 tacklers."  It is a good article talking about the types of grueling workouts Best has put himself through for years to put him where he is today and it talked about the sacrifices his parents made for him along the way (hopefully it will "pay off" for them).

The Bests worried about the public schools in Richmond. So they took extra shifts at work - he manages an auto-body supply store, she's a computer specialist for the Department of Veteran Affairs - and decided to follow the private-school route.

Not surprisingly, young Jahvid - the name combines "Jah," or "most high/almighty" in Caribbean culture (his dad is from St. Lucia), and the last syllable of David - did not always approve. He hated wearing the St. John school uniform, especially when his neighborhood friends teased him after he came home every afternoon. Best recalled getting in trouble at St. John for having his shirt untucked, or for removing it altogether while playing basketball.

By the time he reached Salesian High in Richmond, he had a fresh perspective. He met some public-school kids who were attracting college recruiters, like he was - and then those kids vanished from the radar, derailed by academic or social troubles. Best began to appreciate his structured education.

"I always wondered why I couldn't be like the rest of my friends," he said. "Now I'm thankful for it."

I am anxious to watch Best at The Vault, but let's all hope he gets bottled up for about 66 yards of total offense.