Rivals, Scout, and ESPN all provide ranking systems for recruits headed to Division 1 football programs.  Often, ratings of individual players will vary greatly from one service to another.  In an attempt to determine which service most accurately projects the future performance of players, let's take a look at the ratings that were given to the 2009 NFL first round draft picks back when they were being recruited for college football:

ESPN did not start ranking recruits until 2006, so players from before that time have no ranking.  Despite this limitation, let's look at the trend lines for the different services: 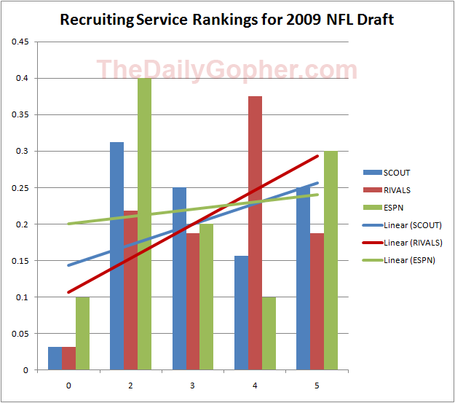 While Scout may have had the most 5 star rankings for recruits who ultimately became first round NFL draft choices, Rivals had the best trendline for accurately ranking future NFL talent.  A more comprehensive analysis looking at later rounds and previous years would best determine which service best analyzes talent.  If I were retired or writing for TDG full time, I'd be eager to put such a report together for later this week.  For now, the first round of the 2009 NFL draft will have to suffice.