Share All sharing options for: Defensive Backs - a 2009 positional preview

The 2008 Gopher defensive secondary was much more adept at slowing down the opposing passing game than the 2007 version, but it was only good enough to finish as the 10th best passing defense in the Big Ten.  With three-quarters of the unit returning is there reason to believe that this group will be any better than last year?

Following the Gameday Preview, it was asked by a member of the local media if coach Brewster thought his set of three or four corners were the best group of corners in the Big Ten.  I am a big fan of Traye Simmons and Marcus Sherels.  And I like what we have backing those two up with Collado's experience and Carter's potential talent.  But calling the group that contributed to finishing 10th in the conference in passing yards allowed is kind of crazy in my opinion.

Big Play Traye Simmons turned out to be a significant find out of the JUCO ranks.  Simmons not only quickly became our best corner on the team but he also dramatically improved our overall pass defense.  BPT led the Big Ten in passes defensed with 14 breakups, notched four interceptions and earned second team All-Big Ten in his first year in a Gopher uniform.  BPT was arguably the only player on the defense who wasn't intimidated and manhandled by Northwestern's Mike Kaftka.  In that game Simmons had 2 picks, one for a touchdown, one TFL and five solo tackles.  Kaftka threw four incomplete passes all day, two of them ended up in the hands of Simmons (if only Kaftka wasn't the most elusive QB in the history of the Big Ten).

Simmons is one of the early favorites to be first team All-Big Ten and he has visions of getting drafted as well.  If he can take big strides towards becoming not just good but great, he'll go a long way towards improving this pass defense even more dramatically.

Marcus Sherels was clearly the biggest surprise of the secondary last season.  People were kind of expecting BPT to play well but who was going to play opposite him was a huge question mark.  Certainly nobody expected the former walk-on WR turned CB to start 12 games and become a reliable cover corner.  Sherels flourished at his new position and seemed natural, makes you wonder why he wasn't put there much earlier.

The hope with Sherels is that after a full season covering Big Ten receivers followed by a full off-season to improve his skills; now he can take a big step forward and truly be one of the best cover corners in the conference.  Personally I am expecting Sherels to really be a wild card and surprise even the most faithful Gopher fans this fall.

Ryan Collado has often been victimized by opposing offenses.  He was kind of the poster child of the 2007 secondary that struggled mightily.  Collado started nine games in that fateful 07 season and most Gopher fans were not too sad to see him fall on the depth chart to nickle back in his sophomore, 2008 season.  Even with the reduced role most of us can't forget the 91 yard TD given up to Nathan Palmer of NIU.

I do not dislike Collado as much as most Gopher.  He was clearly in over his head as a true freshman playing on a defense that struggled at pretty much every position unit.  He was not good enough to be a starter last year and the nickle back role suits him just fine.  I did notice that he had improved from his freshman to sophomore year and with a little continued improvement he will fit in just perfectly at the nickle or dime position.  Gopher fans shouldn't fear seeing #2 on the field.

Michael Carter is the future at corner.  He had a very nice afternoon during the Gameday scrimmage picking off Weber twice while displaying a burst and quick hands.  In the post game press conference Brewster, Lee Campbell and Eric Decker all commented on his playmaking ability and noted he has been doing it all fall.  The true freshman was a last minute coup after he originally committed to West Virginia.

We all need to remember that Carter is a true freshman and although he may be fighting for and eventually win the nickle job over Collado, he is a true freshman and we need to temper our expectations.  He is quick, smooth and has natural instincts for a corner.  But he is small and inexperienced trying to defend receivers at the Big Ten level.  I love the depth he brings and I love the talent he has, he has every tool to have an outstanding career as a Gopher. 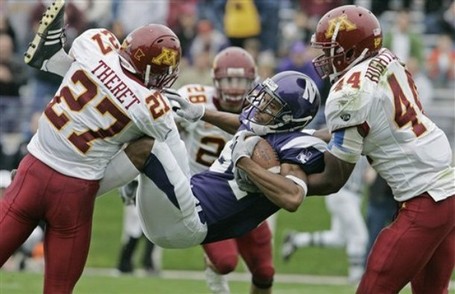 Kyle Theret is another member of the secondary that Gopher fans are not too enamored with.  Personally I think he bring some toughness and attitude to the defense.  Clearly he is not the best cover safety you will find.  He isn't overly athletic or fast.  But to date he has done a great job supporting the run and although not the best athlete on the field he has been a steady performer and leader on the defense.  Assuming the other 3/4 of the secondary is capable of defending the more dynamic receivers on the opposing offenses then I believe there is a place for Theret to not just perform but to thrive.

Kim Royston is the only secondary member with shoes to fill. Tramaine Brock had a season similar to BPT's last year in that he came in as a JUCO transfer and immediately upgraded the Gopher secondary with athleticism and the capability to defend the pass like we hadn't seen in a couple years.  Brock is no longer with us and in steps Kim Royston, the Badger transfer who sat out last year due to the NCAA transfer rules.

Nobody is real sure what to expect from Royston.  On one hand, he left Wisconsin because in his mind he wasn't give the opportunity to win the starting job.  Many will read that to mean he was beat out and didn't want to be a backup.  On the other hand he is a former corner, very gifted and has been getting plenty of good reviews dating back to last season when all he could do was practice.  I'm not sure what to expect out of Royston, but I am really hoping we get a free safety who can really cover receivers.  Being a former corner I'm hoping those cover skills translate well into his safety role.  Time will certainly tell.

Tim Dandridge will be backing up the safeties and possibly pushing for that starter's job if Theret struggles.  Dandridge has good speed and good size.  He'll likely see more playing time against more dynamic, passing offenses where the Gophers will utilize his speed in defending the pass.  There is also a decent chance Dandridge could push for the nickle or even dime spot.  Regardless, I think you will see him on the field more often than you did last year and he will be groomed to be more of a factor next year.

Mike Rallis will also be one of the safeties getting into the playing time mix.  Rallis is the biggest of the secondary coming in at 6-2, 208.  The Edina native was a walk-on who earned a scholarship during fall camp of his freshman year.  Rallis started the Insight Bowl game and recorded 20 tackles on the year.

The secondary should be as good as any we have seen in quite some time.  Sherels and BPT provide two very nice corners who should both be able to slow down any receiver in the Big Ten.  The safeties I'm not as excited about but they are not a liability.  We know what we will get with Theret and Royston could pleasantly surprise.  Overall I really like this group in 2009 (2010 kind of scares me but we'll save that post for 11 months or so).