The Tim Brewster Era - On the Field...has there been enough improvement?

Share All sharing options for: The Tim Brewster Era - On the Field...has there been enough improvement? 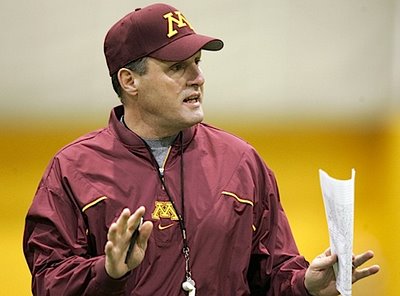 Part 4 in a series of posts on the Tim Brewster Era.

This is where the rubber meets the road.  Running a clean program, graduating kids, bringing in highly ranked recruiting classes and being the nicest guy in the world will only buy you 3 or 4 years (max) as a coach at a major D1 program.  Ultimately everyone is judged by what happens on the field.  Coaches who are a-holes, don't graduate their kids but manage to win will get their chances over and over again.  Coaches who are great role models for the kids on their team, get their kids to earn a degree and are wonderful human beings but can't seem to win enough games will have short careers at the highest levels and spend most of their careers as an assistant.  This isn't a mystery and everyone knows it going it, but it is what it is and this is where we will judge Tim Brewster as well.  I believe the next two season will really show what kind of a coach Tim Brewster is.

We all know that year one of the Brewster era was a disaster.  This leaves us with the question, was the improvement in year two enough?  There are a couple schools of thought and each camp is probably divided by their perception of Brewster before the 2008 season even began.

The anti-Brewster camp will tell you the 0-5 finish is much more indicative of what the Tim Brewster era has in store for us and the next two seasons will be much of the same.  And the other side of that coin are those who believe the Brewster hype and the 7-1 start is what we can get used to seeing once the talent level starts catching up with the rest of the Big Ten.  Many are probably somewhere in the middle and recognize that a six-win improvement is a six-win improvement, but we need to see more.

It is hard to argue with most of the numbers through two seasons.  Statistically the Gophers improved in more than just their win total.  The offense was slightly less productive but the defensive improvement more than made up for it.

So they scored three fewer points per game but gave up 12 fewer, net gain of +9.  The offense gained fewer yards but again the defense more than took care of it, +50 yards.  Turnovers?  Plus 12.  For the most part the defense was MUCH better, the offense was slightly less productive and the end result was +6 in the win column which is ultimately what counts.

But the numbers don't all smell like roses and really they don't tell the whole story.  First of all, there were a couple key stats that saw a dramatic reduction in production.

30 sacks allowed and last in the Big Ten in penalties really hurt the Gophers last year.  A couple timely unsportsmanlike conduct penalties may have cost us the game in Madison and the constant pressure on Weber during the Northwestern, Michigan and Iowa games crippled the offense. Those stats are bad and the stats higher up in the post are pretty good but they are still misleading.  While we saw dramatic improvement defensively, the defense still ranked near the bottom of the Big Ten.  We gave up 130 fewer yards and 12 fewer points but that was only good enough to finish 10th and 6th respectively in the conference.  Improvement made, but still a lot of room to go to be competitive with the upper half of the conference.

So clearly this team was "better" in 2008 than they were in 2007, but the question still remains has there been enough improvement?  The answer to that, through two seasons, is clearly no.  The 2009 season has expectations that are virtually the same as they have been for several years.  A series of 7-5 regular seasons followed by a mediocre bowl game wasn't enough to keep Mason's job and that appears to be where we are headed this season as well.

It comes down to winning.  Improving in important statistical categories certainly helps but having more Ws than Ls and spreading the gap between those two numbers is the ultimate barometer for a coach and his program.  Brewster improved dramatically from year one to year two in the W column.  His team may be better in year three without seeing much (if any) improvement in victories.  But sooner, rather than later he needs to make good on his promise of competing for a Big Ten title.  I'm not expecting a Rose Bowl on a regular basis, we need to be realistic here.  But being able to compete with just about anybody on each and every Saturday is a realistic and attainable goal.  I am a patient person and I firmly believe Brewster should be given time.  There is no doubt that he is improving the overall talent on this team, but that has to translate into wins and bowls in January.

This has all been rather vague, so let me be more specific.  The 2009 season is a very difficult schedule, but Brewster has a talented and experienced roster.  2010 will see a lot of talent graduate, especially on defense but that will be the time for his vaunted recruiting classes to step up.  So the next two seasons should really show what he is made of as a coach.  Can he get his teams to play together and play well?  Can he get the most out of his team and have them prepared to play well regardless of who or where they are playing?  And if he is able to get his teams to play well over the next two seasons I want to see a January bowl game.  I want to see at least a split with Wis and Iowa over the next two seasons.  And I'd even like to see one win over OSU/PSU in the four games played this year and next.  I don't think that is too much to ask otherwise I'm afraid we'll see a career of talented football teams stuck in the same rut of mediocrity that we have seen for several years.

Conclusion?  Way too early to tell, but clearly we are not there yet.  The excuses of lack of talent and inexperience can no longer be used.  And I really don't want to hear the excuse of a difficult schedule because good teams are capable of beating good teams.  If we want to be in that group of "good teams" it cannot be used as an excuse.  Increased talent means increased expectations and Brewster needs to prove he is capable of winning with said talent.