Last season saw a marked turnaround for the Gopher defense. One of the leaders of that defense was senior defensive end Willie VanDeSteeg who is now in an NFL training camp. VanDeSteeg led the Gophers with 10.5 sacks, and was a constant threat to sack the quarterback.

Entering the 2009 season, the Gophers lose VanDeSteeg and William Brody to graduation. Brody recorded only 4 tackles in 2008, so the loss which could have the greatest impact on the Gophers is that of VanDeSteeg. With several defensive ends who are one year older and stronger returning to the team along with two new freshmen, will the 2009 Gophers be upgraded or downgraded at defensive end? 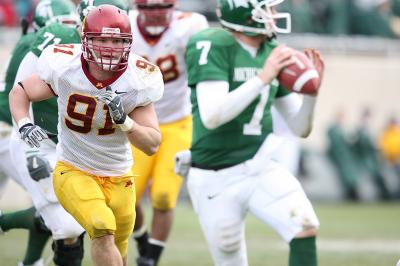 Summary: While losing VanDeSteeg could be a blow to the pass defense, he often did a poor job of containing the run. In particular, scrambling quarterbacks were often able to avoid containment from his side of the pocket. The most obvious case was when Northwestern's backup quarterback, Mike Kafka, ran for 217 yards. Time and time again, Kafka scrambled around VanDeSteeg's end for sizable gains in yardage.

Returning Starters (or players who saw the field often): Cedric McKinley and Derrick Onwuachi both will be seniors for 2009. Both saw frequent action in 2008, and will likely enter pre-season practices as the starting defensive ends. Expect both McKinley and Onwuachi to improve slightly from 2008 having spent another year refining their skills and engaging in strength conditioning. Raymond Henderson was rated as the second best player in the state of Wisconsin in 2005, and originally committed to Tennessee as a four star recruit. Henderson was at one time reportedly held back by health issues, and could be in better shape for 2009. While unlikely, there is a possibility that Henderson could reach the potential that was once predicted.

Underclassmen and Incoming Freshmen: Four players from Tim Brewster's first two recruiting classes will now have at least one year in the system, and could compete for time at defensive end. Here's a breakdown of their measurables:

Incoming freshmen Matt Garin and Kendall Greogry-McGhee have the potential to develop into effective defensive ends, but will probably need at least one year of development in the system due to the grueling physical requirements of playing on the defensive line. Of the underclassmen and incoming freshmen, look for Anthony Jacobs and Brandon Kirksey to see the most playing time.

While a controversial prediction, look for the Gophers to be upgraded at defensive end in 2009. While Willie VanDeSteeg was an excellent pass rusher, he often failed to contain the run and the quarterback scramble on his end of the line. Take into account an extra year in the program for McKinley and Onwuachi and the maturity of four talented underclassmen, and the void left by VanDeSteeg's departure shouldn't be missed. I'll predict that the most likely scenario is for Anthony Jacobs to have a breakout season.

So, for your opinion. Will the Gophers' be upgraded or downgraded at defensive end in 2009 having lost VanDeSteeg?: