Wisconsin Week by the Numbers, Part 1

Share All sharing options for: Wisconsin Week by the Numbers, Part 1

For Wisconsin week, I'll be publishing a series of posts that statistically break down the interstate rivalry.  Both teams now have four games under their belts, and we can take a look at how the two teams stack up by the numbers.  Since Minnesota faced California while Wisconsin played Wofford, averages alone can be misleading.  So, let's start by taking a look at how both teams have done versus their opponents' defenses: 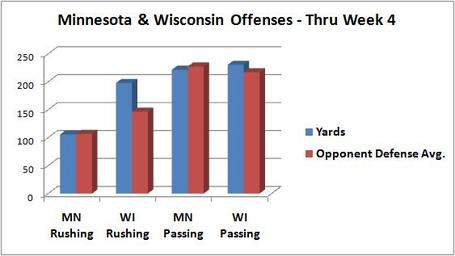 Here's a breakdown of how both teams stacked up on a weekly basis: 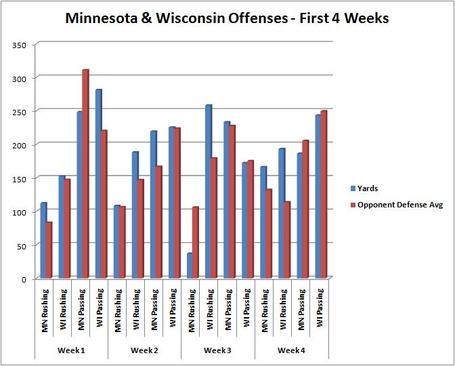 The most glaring disparity is the outstanding performance of Wisconsin's rushing game.  Their 197.8 average rushing yards versus 146.5 yards opponents' defensive average are not an inflated statistic due to a creampuff schedule.  Wisconsin has in fact racked up impressive rushing yards versus every opposing defense.  On the other hand, Minnesota's anemic 105.8 rushing yards per game is not as bad as advertised, and with the exception of the California game has not been far off from what the opposing defenses should be expected to allow.  Most would agree that the Badgers have an excellent running game, but widespread criticism that Minnesota has a poor running game is not supported by this analysis.  If the numbers are accurate, Minnesota in fact has a very average running game.

Part 2 of this analysis will focus upon the defenses for this weekend's coming matchup.  Part 3 will look at all of the numbers, and I'll take a stab at forecasting how this epic battle will ensue.