Wisconsin Week by the Numbers, Part 2

Share All sharing options for: Wisconsin Week by the Numbers, Part 2

On Monday, I broke down the offensive performances of both Wisconsin and Minnesota through the first four weeks of the season.  For part two of my Wisconsin week preview, let's break down how both teams have fared on the defensive side of the ball.  The following graph compares both team defenses versus what their opponents have allowed on average: 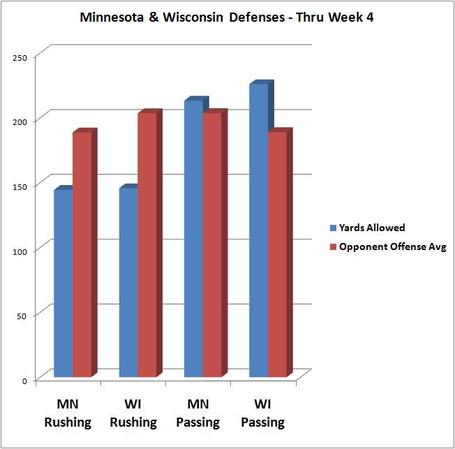 Both teams have allowed fewer rushing yards than would be expected form an average defense.  Minnesota has allowed slightly more passing yards per game than the average, while Wisconsin has allowed nearly 20% more passing yards than would be expected from an average defense.  At first glance, Minnesota and Wisconsin both appear to have strong defenses against the run while Minnesota has a slightly better pass defense.

Now let's break down the performances of the defenses by week: 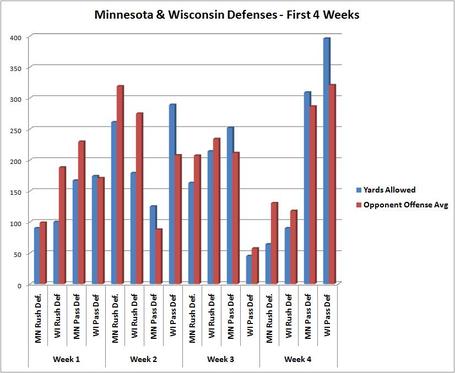 After defeating Wofford, it was reported that Wisconsin had a strong showing against the pass by only allowing 47 yards through the air for the game.  That number seems impressive until you consider that Wofford only averages 57.3 yards per game with their passing attack.  Both Fresno State and Michigan State were able to establish effective passing games against the Badgers.  On the other hand, Minnesota's pass defense has been below average against every team since game one at Syracuse.

Overall, comparing the performance of the Minnesota and Wisconsin defenses doesn't reveal any glaring differences between the two teams.  Minnesota may have a slight advantage defending against the pass, but even so they have performed slightly below average in that area.

In Part 3 of my Wisconsin Week analysis, I'll take a look at scoring, turnovers, and tying all three parts of the analysis together for a prediction of Saturday's storyline.