This is the premier game I look forward to every year (this one and the one where the Spartans come to the Barn next week). It is a great match-up of well coached teams who execute well and play great defense.

There are things that these two teams both do very well like scoring (1st and 2nd in B10), shooting (1st and 3rd) and defending (1st and 2nd in FG% D). But what may intrigue most about this match up are the strengths vs. weaknesses that will ultimately determine the outcome of the game. 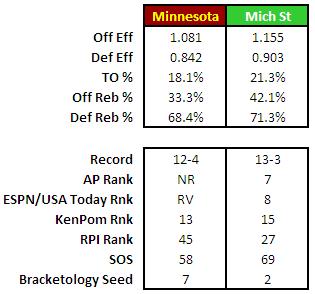 This has clearly been the hallmark of the Gophers this season (and last). We force turnovers at a rate of 27.5% of our opponent's possessions. That is a really good number and good enough to ranks us third in the country in this tempo-free stat. For this game, what makes that stat even more attractive is the fact that Michigan State comes into the game having a tendency to turn the ball over. 21.3% of Spartan possessions result in a turnover, that is 196th in the country. This turnover issue is not lost on coach Izzo.

"What’s been bad is our turnovers," Izzo said. "What’s been good is we’re still holding teams in the 30s (in field-goal percentages), even though teams are getting layups off those turnovers."

Tubby also recognizes how important creating turnovers is to the Gopher offense.

"If you talk about any team, you have to talk about your up-the-middle, and I think it starts with our point of attack," Smith said. "Al Nolen and Damian Johnson are very outstanding defenders. And then, we have good shot blockers and good post defenders, guys that defend the basket, in Ralph Sampson and Colton Iverson.

"We’ve always tried to extend our defense. We feel like we’re not that offensively gifted, so we need to create more offense with our defense. It’s been a total team effort. Our guys have bought into it and they’ve done an outstanding job so far."

Clearly this will be a huge factor tonight. Despite being on the road, if the Gophers can generate some turnovers and turn those into points they can be in this game till the very end. Michigan State is obviously aware of this so if they can take care of the ball they should be in pretty good shape.

This key area is not a great match up for the Gophers. Michigan State is exactly the kind of team where guys like Trevor Mbakwe and Royce White could make a huge difference. Michigan State is one of the best rebounding teams in the country and they are especially good rebounding on the offensive end. The Gopher's current roster, on the other hand, struggles to end possessions with a rebound.

The Spartans are 7th in the nation at offensive rebounding. They have been extending possessions by grabbing 42.1% of their own misses on offense. Conversely, Minnesota is 122nd in the country when it comes to defensive rebounding as they grab just 68.4% of opponent misses. We do an adequate job of crashing the boards offensively but defensively we lack the physical presence and ability to hold box outs and finish the possession. Michigan State rebounds with multiple guys. Raymar Morgan and Draymond Green are strong and physical. Guys like Delvin Roe and Derrell Summers are athletic and difficult to box out. In three contests last season, Michigan State dominated the boards and the scoreboard.

The Gophers are capable of pulling this off but rebounding is key and making shots will be critical. At Purdue we outrebounded the Boilermakers and forced 17 turnovers, but that wasn't nearly enough because we shot just 30.8% from the field. Getting some easy baskets and getting several open looks for Blake Hoffarber are essential.

It will be interesting to see which team best hides their weaknesses tonight.