And we quickly get to the biggest must NOT LOSE game of the year. We will have several road games where a win will have more meaning and do something positive for our resume but this game is a must-not-lose. Iowa is the consensus worst team in the conference. That is the opinion of everyone (I took an informal poll) and backed up by pretty much any ranking or stat you want.

With that said, Purdue strolled into Iowa City knowing all of this and nearly earned their first loss by expecting to win. It was not a pretty game where Purdue was trailing at the half and was outrebounded for the game. They did get the win but hopefully we can learn from their lack of motivation to start the game.

Ultimately we need to concentrate on rebounding and do NOT give them too many open looks at threes. We should be fine but this would be a bad loss (an NCAA resume killing loss) so I am nervous. 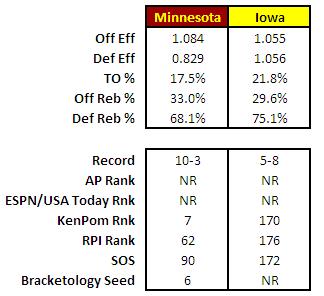