Share All sharing options for: Golden Gophers vs. Boilermakers - preview and OPEN THREAD

The first real game of the Big Ten season is here. I cannot express to you how much fun it is going into a game like this knowing that a win isn't exactly likely but wouldn't be all that surprising. We are not a favorite to win the Big Ten but we are talented enough to beat anybody. That includes undefeated and the fourth ranked Purdue Boilermakers.

There are some great matchups in this game that are really intriguing. You have one of the best defensive point guards in the league going up against one of the best scoring guards in the league. Chris Kramer is arguably the best defender in the Big Ten and he'll likely be guarding Blake Hoffarber, the hottest shooter going right now. Robbie Hummel vs. Damian Johnson and Keaton Grant guarding Westbrook are also fine matchups as well.

We have two of the best shot blocking, stealing and overall defensive teams in the Big Ten. But both teams are also very efficient offensively and have been scoring a lot of points. 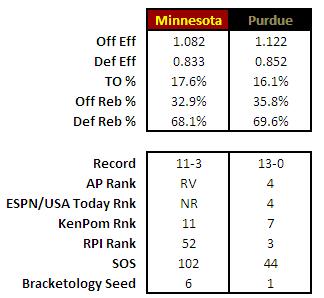 Al Nolen vs. E'Twaun Moore - battle of a couple very good guards. This matchup will be best to watch when Purdue has the ball. Moore is leading the Boilermakers in points with 16.3 per game, but Nolen is pretty good defensively. Keeping ETM under 15 should be a major key if the Gophers want to come away with a road win. On the other end of the floor Nolen needs to make sure he doesn't turn the ball over and he gets the Gophers into an offense. Moore is pretty good defensively as well so don't expect Nolen to score more than his average. His focus will be on the defensive end of the floor.

Chris Kramer vs. Blake Hoffarber - The Hoff is the hottest thing in the Big Ten right now and Kramer could be his cryptonite. Kramer is a three-time all-defensive team selection and the Big Ten's 2008 Defensive Player of the Year. Hoffarber, on the other hand, has averaged 4.3 threes made per game over the last seven games making 30 out of 50. The kid is hot and he'll get to go up against one of the Big Ten's best tonight. This matchup will be outstanding to watch when the Gophers are on offense.

Damian Johnson vs. Robbie Hummel - Hummel was at one point considered the best player in the Big Ten. Johnson is arguably the most underrated defensive player in the Big Ten. I would say this is not a great matchup for Johnson but he is certainly capable of slowing Hummel down. This one, like the ones above, should be great to watch.

Tubby Smith vs. Matt Painter - The Big Ten is loaded with some great coaches but this will be a particularly intriguing matchup. Both teams play great defense but the coach who is able to dictate tempo and control things with their defense will win this game.

This game should be great and here are few keys to the game (and they usually factor very little in the outcome of the game)...

Rebounding - Advantage Purdue - I have been harping how rebounding is a weakness of this Gopher club and tonight it could rear it's ugly head. Having Sampson out will make this interesting as Iverson seems to fight for rebounds better than Sampson has. He isn't exactly cleaning the glass but he at least has the mindset to get and get the ball. Purdue is just too good to give them second shots we absolutely have to keep them limited to one shot per possession.

Bench - Advantage Minnesota - The bulk of Purdue's production comes from their starters while the Gophers may be the deepest team in the Big Ten. I'm under no delusions that we'll run the Boilermakers out of Mackey Arena nor am I saying their subs are lacking in any talent. But the Gopher bench is deeper and they will put more full-court pressure on Purdue than they usually see. If they get into a little foul trouble or we get to them with some pressure the Gophers will be able to stick around till the final buzzer.

Lawrence Westbrook - Assuming Kramer is guarding Hoffarber, Westbrook might be a real key tonight. If he can play controlled and get his offense rolling like he did in the Penn State game, he could be the X-Factor for the Gophers tonight.

Tempo - Advantage?...the winning team - As I said above the team that controls tempo will win this game. These teams are not all that different in terms of style. The problem for the Gophers is that for the first time in several games they will not be the most athletic team on the floor. They'll have to control tempo and execute like they haven't all season. The real key for Minnesota is to not let Purdue get on a big run at any point. The Gophers will really struggle if they have to come back from a 14-2 run or something of that nature at any point in the game. Don't let Purdue control tempo.

Should be a great game on national TV. This is a chance to post an exclamation on that NCAA Tournament resume. We are playing well enough that getting into the tournament shouldn't be a problem but a win tonight would me the difference between playing in the 8/9 game again and getting a better matchup in the 7/10 or even 6/11 pod. Certainly this game will be an uphill climb but it is fun to have a team that CAN win this game and at the very least it should be a great game.