Both Gopher commit Jimmy Gjere and Seantrel Henderson will be playing in the U.S. Army All American Game on Saturday. Be sure to tune in and watch these Minnesota linemen play alongside the top talent in the nation.

Dr. Saturday has a great photo of the highlight from the BCS Championship game, The Gold Luchador: 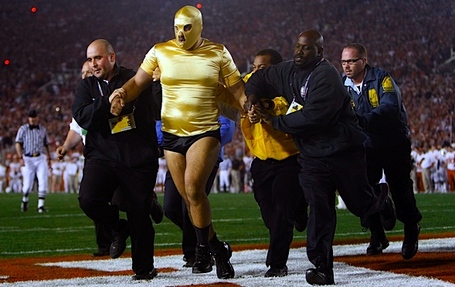 USC backup quarterback Aaron Corp will be transferring to Richmond for his senior season. Corp was the 3rd best quarterback in the 2007 recruiting class, went to USC, had Matt Barkley follow him there, and faced the reality of riding the pine for his college career.

Rumors are swirling that the Chicago Bears are interested in Gophers' offensive coordinator Jedd Fisch:

Resolution for the Trevor Mbakwe case may take a while, as his next trial date is scheduled for February:

Mbakwe told the Pioneer Press last summer that he wasn't guilty. Samms stated previously that the female victim of the alleged assault mistakenly identified Mbakwe. He said his client's alibi witnesses would testify that Mbakwe was attending a basketball party at the time of the incident.

Minnesota athletics director Joel Maturi said Wednesday that coach Tubby Smith would decide when Mbakwe would play if his case is resolved in a satisfactory manner. Maturi said Mbakwe might redshirt.