Statistically, Time Brewster could still lead the Gophers to either bowl eligibility or a strong five win finish to the 2010 season. In my opinion, either scenario would save his job. Now, such a feat would require winning some very difficult games. How difficult? Let's take a look at the updated Hot Seat Magic Number Chart: 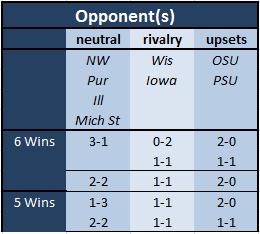 Having already lost to both Northwestern and Wisconsin, the Gophers options for a strong finish are slim. The only way that they can lose to Iowa and reach six wins would require wins versus both Ohio State and Penn State. Unlikely. Even if lightning strikes and they beat Iowa, Ohio State and Michigan State are having monster seasons. The only conceivable (yet highly unlikely) scenario would be wins versus Iowa, Penn State, Purdue, Illinois and either Michigan State or Ohio State for a 6 win season. If that happened (please...I'm not saying it will) Brewster should deserve a shot at the 2011 season.

The list is short, and the odds are against him. Yet, if one of these scenarios happens, do you think he deserves another shot?