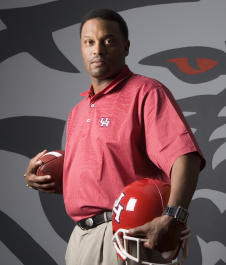 Next candidate profile is going to be Kevin Sumlin who has been on everyone's short list for quite some time. He's spent some time as a Golden Gopher coach, he has Offensive Coordinator experience at Oklahoma and he has been rather successful as a Head Coach at Houston. Let's take a look in greater detail.

As you can see Sumlin was the wide receivers coach during most of the Jim Wacker era and then held on for one season under Mason as the quarterback's coach. Five seasons as Minnesota as an assistant and five seasons at Oklahoma were his longest tenures as any one school.

The first thing I like about Sumlin is that he's been here. He spent 5 years coaching here. Are things different? Absolutely but he is familiar with the challenges here and his learning curve of getting acclimated would be much shorter than many others who may be offered the job. This isn't a huge advantage but if offered and if Sumlin is interested he would know exactly what he is getting into. Apart from hiring a former player I think this is about as close a tie as we are going to get. Former Big Ten player and spent five years coaching for the Gophers.

He's shown that he can beat teams he isn't supposed to beat. 2008 was Sumlin's first season at Houston. In his first season he beat two ranked teams. In 2009 he beat #5 Oklahoma State on the road and then followed that with a win over Texas Tech the next week and then two weeks later won on the road over Mississippi State. Two Big 12 wins and an SEC win in a three week span. Three wins over ranked teams with a Conference USA team made up primarily of his predecessors players? I don't need to remind you that we didn't see a win over a ranked team in four years under Brewster.

His 2010 recruiting class ranked #45 in the country. That isn't exactly a top 20 class but remember that he's in Conference USA. His 45th best class was higher than Brewster's, higher than TCU, Boston College, Louisville, Arkansas, Wisconsin and Kentucky (that's 2 SEC teams)! That recent class was barely behind Texas Tech, Iowa, Georgia Tech and Oregon State. That shows he is recruiting with the big boys while facing some challenges.

His first two full recruiting classes were 3rd in Conference USA and then 1st in C-USA. His 2010 class was highlighted by a four-star QB ranked as the #5 QB in the country. Not bad for a Conference USA program. The easy rebuttal is that he's in Texas where you can't throw a horned frog without hitting a D1 football player. But the fact is that Houston's recruiting wasn't nearly as relevant prior to the Sumlin hire. Even after the big boys (Texas, Texas Tech, Texas A&M) are finished with their classes he still have to fight with Baylor, TCU, SMU, North Texas, Rice, UTEP and dozens of BCS programs trying to tap into that Texas pipeline.

Winning helps but he's getting things done and turned around in a short amount of time. With the move to Minnesota one could assume that he would retain all of those Texas recruiting relationships and hopefully continue to bring Texas talent to Minnesota.

Does anyone remember Jim Wacker? Coached at a smaller Texas school with a wide open offense that scored a bunch of points, good recruiter who would develop that Texas pipeline but his teams couldn't ever figure out how to stop an opponent from scoring. Well that sounds a lot like Kevin Sumlin at this point. When Sumlin is interviewing he absolutely better have a plan as to how he plans to field a defense at Minnesota. Hiring an outstanding defensive coordinator is a non-negotiable and better be part of the interview vetting.

Sumlin also recently signed a new contract that might get expensive for Minnesota. Sumlin is making about $1.1 million per year. Maybe offering to double his salary would be enticing but is the U's administration willing to fork out that much? I think we all agree that they should if they are serious about putting a winning program on the field but there is nothing that would indicate they are willing to "show me the money". In addition to a likely $2 million per year salary, I'm sure there is a buyout that would have to be paid to Houston.

I've been a fan of Sumlin's for a while now though his lack of a defense concerns me greatly. Overall I think he'd be a great fit if he comes with a plan and a great defensive coordinator. But that is certainly worth being concerned about. I also am not 100% convinced he'd come to Minnesota with the same wide open offense that he's currently employing in Houston. His offenses at Oklahoma were high scoring but it was not the same thing he's running now. He's put together high scoring offenses with great talent at Oklahoma and with far less talent at Houston. I have no fear that he'd bring some fun, offensive football to Minnesota.

Without doing a lot of research I was very excited about Sumlin. The more I look at him the more I see Jim Wacker. It probably isn't fair for him to make that comparison but it is just so eerily similar. I love that in just two years on the job at Houston he beat three ranked teams and two other BCS teams. I love that he's shown he can raise the level of recruiting at Houston. I love that he put in nearly 15 years at BCS programs before becoming the head man down in Houston.

Is he the right guy? I don't know but I think he'd be a good hire. I'd be willing to give the Sumlin Era a chance. If he gets the job then proceeds to hire a defensive coordinator that gets me excited, I'd be thrilled with the hire.