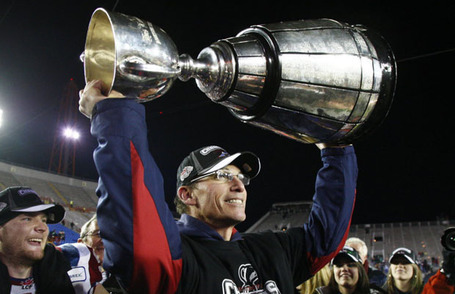 One thing the University of Minnesota is missing is a coaching tree that is rooted in Golden Gopher football. There are very few former players who have been successful coaches at other levels who would love to return home and turn the Golden Gopher program into a winner. Tony Dungy has a Super Bowl ring but he's at a point in his career that he no longer desires a career in coaching. There are other former Gophers out there like Norries Wilson at Columbia and Corey Sauter down at Southwest State, but none are exactly ready to lead a Big Ten program.

One former Gopher and Minnesota native may be a logical choice. Marc Trestman was a Gopher QB for three years and the St. Louis Park native has had some success at various levels of football. As you can see below Trestman has had a lot of experience directing offenses at the NFL level and currently has been very successful in the CFL finishing as they Grey Cup runner-up and champion in his first two seasons.

The first is that jumps out on Trestman's coaching resume is that he has never been in the same position for more than three seasons. One thing I'd really like to see with this next hire is a guy who will first of all be successful and secondly will be here for several years and build something. Trestman hasn't shown that anywhere in his long career. On the other hand he was Miami's QB coach as they won a national championship, he was the OC in Cleveland as they went to an AFC Title game, and was the OC for Oakland in 2002 when they represented the AFC in the Super Bowl. Last year he took the Montreal Alouettes to the CFL's Grey Cup Championship.

Well first and foremost he is one of us. He played for the Gophers for three years and grew up in St. Louis Park. He's from here and possibly would want to return to the U of MN and turn that program into a winner. I don't know if he even wants such a task, but being from here is clearly a reason why he would fit from our perspective. the hpoe is that he'd be a guy who would be successful AND would be a guy who would stick around.

Secondly he has been rather successful as an offensive coordinator at multiple stops and in his brief tenure as a head coach he has been very successful in the CFL. At four NFL stops as coordinator he led offenses on teams that made the playoffs in his first year on the job. He put up big numbers with talented quarterbacks like Steve Young and mediocre quarterbacks like Scott Mitchell. In the CFL Trestman has put up a 37-14 record to date through nearly three seasons. And of course in year two he won the Grey Cup.

And there were others but many are names you'll barely remember. His days in Arizona were not very impressive but he was also a part of the infamous Vince Tobin era and the team's ineptness cannot all be pinned on the offensive coordinator. He also never had a quality running back to work with. In San Fran he was given Derek Loville and Terry Kirby! In Arizona he had Adrian Murrell and then Michael Pittman and Thomas Jones (as a rookie). In Oakland he got the most out of Charlie Garner and Tyrone Wheatley.

In the NFL he was always a bridesmaid, but never a bride. Some of that may be attributed to never being a part of a coaching staff with staying power. Vince Tobin and Bill Callahan were never the answers. George Siefert moved on after the '96 season. He had success as a coordinator but his bosses never seemed to stick around which possibly hindered his upward mobility.

Well...if this were any other BCS program in the country he wouldn't be on the short or the long list of potential candidates. I don't want to discount his success as a head coach and his offensive abilities but the only reason he's getting serious consideration is because he is one of us.

Furthermore, you’d think that a coach so highly regarded, especially one that local yokels had pegged to return to the U for years, would have made his mark in the college or pro ranks much earlier than he has. But no, Trestman has not. Instead, the handful of loud Trestman backers still insist he’s the right man for the job, despite only 4 years of FBS experience in a 30 year coaching career – and mediocre to bad results from said 4 years at that.

I think one of the biggest concerns with Trestman is his lack of any real recruiting experience. As mentioned above Trestman has over a 30 year coaching career and spent only 4 of those at a BCS school. I'm sure he is familiar with the recruiting game but he has absolutely no track record of success or nearly enough experience to show that he's capable of getting it figured out. This would be a major concern. Yesterday I said Kevin Sumlin would have to come in with a rock-solid defensive plan. Marc Trestman would have to sell his plan to recruit.

A concern may also be the fact that he was never given a chance to lead a team in the NFL. If he was such an brilliant coaching mind then why was he never given that opportunity? That may be a concern for some, but sometimes it comes down to circumstances. NFL head coaching jobs are not an easy thing to get. There are so few openings each year with a lot of qualified coordinators, former head coaches and college head coaches all yearning for those precious few jobs. This isn't a huge concern for me.

My final concern is that his limited exposure to NCAA football would therefore give him limited exposure to highly qualified assistants for NCAA football. Considering he's been in the NFL for the vast majority of his career would mean he absolutely needs talented assistants to help him coach college level athletes. And more importantly to help him recruit college athletes. If Trestman were hired I would watch very intently at who he brings in to run his offense, defense and the recruiting experience of all his assistants.

Experience - B+
Proven Winner - B-
Minn/B10 Ties - A-
Recruiting - incomplete

Trestman is an interesting candidate. Looking at his resume on paper he has ties to Minnesota, his resume demonstrates offensive success as a coordinator and success as a head coach. The being from here is important not from the perspective that he "gets us" or that we'll all feel better having someone who is "one of us," but this guy would have a chance at staying here for a while. If he has any sustained success he's not going to be looking at that next SEC opening. There isn't another "dream job" out there for him other than maybe an NFL head job, but that really doesn't seem likely. Some success and continuity is ideal for Gopher fans (yes I want my cake and I want to eat it to).

On the other hand the reality that if he was not from here he wouldn't be a candidate is what matters most. We need to hire a guy that people recognize. Someone that other schools would attempt to hire. Someone who can energize the program and the fan base by name recognition alone. We all remember when Tubby Smith was hired and season tickets were being sold left and right the day it was announced. We are not likely to hire a guy quite that energizing, but we can try. In the end if Trestman gets the job it better be only because several others turned it down first. I can live with Trestman but I think the fan base will greet him with a collective yawn while the rest of the conference would remain confident that Minnesota will continue to toil in sub .500 conference seasons.