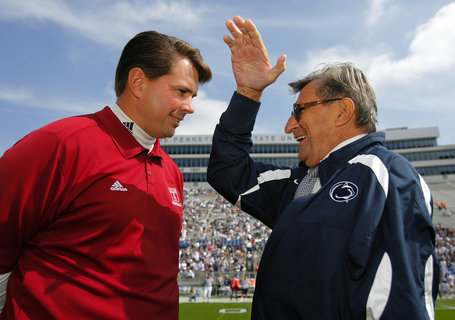 Let's take a closer look at Temple head coach Al Golden. For a lot of Gopher fans Golden sits at the top of their list. Golden is young and has been successful as both a coordinator and a head coach. Let's find out more about him.

As you may recall I am using four criteria for choosing the next Golden Gopher head coach. Experience, Proven Winner, Ties to MN or Big Ten and demonstrated Recruiting success. Golden fits all four. He has five years as a defensive coordinator at a BCS school on his resume and he is entering his fifth year as head coach at Temple. In that time he has been successful improving each season and finished with a 9-4 record in 2009 leading Temple to their first bowl game since 1979. He is a former Big Ten player for Penn State. And recruiting is difficult in the MAC but his 2010 class was the 2nd best class in the MAC. His recruiting isn't making national headlines but this year he projects to have as many as seven players make the All-MAC first team, something unheard of for Temple just a few years ago.

Al Golden is a Big Ten guy with east coast ties. He refers to his offense as an "East Coast Offense" that is a single back with at least one tight end. The run game sets up a high efficiency passing game. Defensively it is a traditional defense that stops the run first. In 2009 the Owl defense finished 18th nationally in rushing defense, 25th in 3rd down efficiency, 32nd in total defense and 39th in points allowed. As a former player at Linebacker-U and linebackers coach at two different stops, one would imagine that Golden knows how to coach up linebackers.

The turnaround at Temple is actually pretty remarkable and should not be discounted just because it is in the MAC. In the 20 seasons before Golden arrived Owl fans endure 13 seasons of 2 wins or fewer! Read that last sentence again then let is sit in. 13 seasons of two wins or fewer! Only one season in that 20 year span was a winning season, all the rest (19 / 20) were four wins or fewer; mostly fewer. He did stumble to a 1-11 season in year one but since then it has been a steady climb in wins. 4-8 in 2007, 5-7 in 2008 and then 9-4 in 2009. His 2010 team is experienced and will be contending for the top spot in the MAC.

His resume might be missing that one big win over a team he wasn't supposed to beat. Though he did take out Big East favorite UConn this year and they held a half-time lead at Penn State this year holding the Nittany Lions to 5 FGs. But this program actually IS light years ahead of where it was when Golden took over. He hasn't been flashy by taking a one-win team to 10 in just one year and his offense isn't setting any records. But this guy is building a program and teaching his teams how to play football the right way and it is resulting in wins.

And finally, how awesome would it be to have Coach "Golden" coaching the Golden's Gophers!

The thing that might keep Al Golden from Dinkytown is Al Golden. He may not want to take the job while he holds out hope for the Penn State job when that inevitably opens up. I would assume that even Minnesota would be able to pay him significantly more than he's making at Temple. And having a Big Ten budget (even one as inaccurately reported as tiny as ours) has to be appealing. But the idea that Joe Paterno will have to be retiring sometime soon has to be appealing for him. If he comes to Minnesota and doesn't start to win before Peterno retires then he can kiss that job bye-bye.

Now that job may not be opening up soon and there is no guarantee that he'd get the job anyway with some longtime, loyal and seemingly qualified assistants already on the PSU staff (plus other coaches throughout the NCAAs). If he holds out for that one job he may be stuck at a MAC school longer than he should be. But I can see the allure of holding out to coach your alma-mater and that may keep him from taking the Minnesota job seriously were it offered to him. Golden was also considered and interviewed for the Tennessee and Cincinnati jobs last year. He removed himself from consideration before the job was offered to anyone. History suggests that he may not take the Gopher job seriously either unless we came after him hard and quick.

Recruiting is the one area that I'm not 100% sold on. He has done well with little resources and has implemented a strategy that works for Temple (more on that below). This is clearly 4th on my list of importance, but it is an important factor. Rankings wise if you go by Scout (which ranks all D1 programs' recruiting classses) the Owls averaged a ranking of 102nd nationally in the four years prior to Golden. If you throw out Golden's 2006 class (because he had less than 2 months to put it together) his average rank has been 78th best nationally. Rankings mean a little but all this really demonstrates is a fairly significant improvement from prior staff to the Golden staff. If he can teach kids to play football, coach the up and start winning then recruiting becomes easier. It rarely works the other way around.

The real value in Golden and his recruiting is that he's able to do what so many others in the Big Ten have been able to do. They find guys who fit their system (regardless of star rating) and then they do two things with these kids. They teach them how to play football then they put them in position to succeed. Bernard Pierce is an excellent example. The two-star RB came into Temple as a true freshman and led the MAC in rushing with 1,364 yards. Adrian Robinson was a two-star LB who as a sophomore led the MAC in sacks. This is what we need. 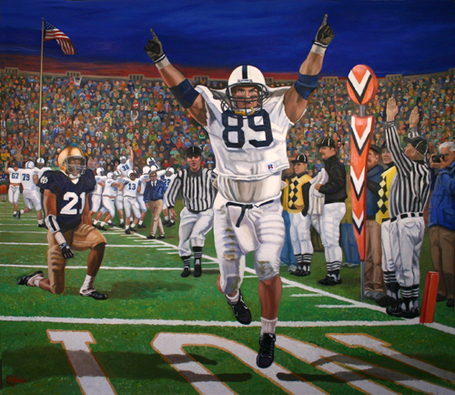 I think Golden has shown that he can win with less. He hasn't been coaching for decades but he is a young coach who has established himself with 10 years of coordinator and head coaching experience. I like his Big Ten ties, the drawback being that this isn't the Big Ten job he wants. And recruiting is incomplete. I don't know what kind of success he may have had while at Virginia and his success at Temple is really hard to gauge.

His recruiting hasn't been that of headlines but what I like is that he knows his limited resources and has implemented a strategy that works for Temple.

Golden has emphasized a local approach, rarely pursuing players who live more than a three-hour drive from Philadelphia. The roster boasts 68 players from Pennsylvania and New Jersey.

Would this work here? No. There isn't enough talent within a 3 hour radius. But what he has done is accepted his challenges and figured out a way to get the most out of what resources he has. There is a talent base there and rather than casting a wide net all over the country his recruiting efforts are focused and he is bringing in players that will fit his program.

"Here's what happens. All over the country you have head coaches saying to their staffs, 'Tell me why you like [this player].' And the assistant says, 'He's got an offer from Pitt and Boston College and Maryland and West Virginia.' Then the head coach says, 'You haven't answered the question. What do you like about him? What do you like about him the context of what we're doing here?' There's a herd mentality out there. Coaches are recruiting kids and they don't even know why they're recruiting them."

It is hard to project how he'll recruit if hired at Minnesota or how his strategy would change with more resources. But I'll go with someone who has shown he can coach kids to succeed in his system.

Overall, I think he is a great candidate. He is the kind of guy who can make Minnesota competitive. He isn't flashy or sexy, but he is young, smart and talented. We'd be lucky if he is announced as your next Golden Gopher head coach.

Want to learn more about Golden? Here are two pretty comprehensive articles on him and the work he's done on the Temple program. These are must reads, especially if Al Golden becomes your next Golden Gopher head coach.