I wrote this article about a year ago, and thought this a fitting time to republish it:

If the Gopher football team loses versus South Dakota State on Saturday, there will inevitably be an emotional tidal wave of irrational exuberance demanding a new head coach. After giving current head coach Tim Brewster only two recruiting classes to turn the entire program around and with two failed coaches preceding him, finding a new head coach would be a tough chore. If in fact a search for a new head coach is to commence, there is but one candidate who could turn the Minnesota program into a BCS contender within one or two years: Erin Andrews. 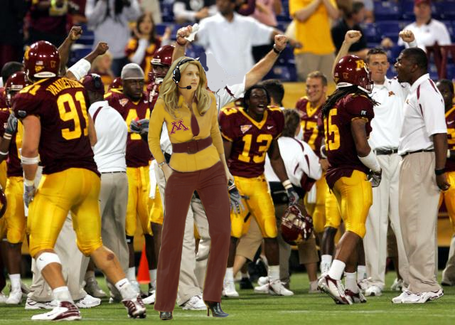 The case-in-point is only half comical, because while it is a farce the argument has credence:

Ridiculous? Yes. Am I Serious? Of course not. But then again, it just might work.