It is BADGER WEEK. The season has been nearly unbearable, but how good would a road win at Madison feel? All I know is the Gophers are UNDEFEATED ON THE ROAD this year. Look out Madison, here we come! 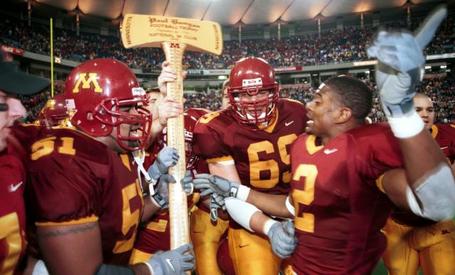 Personally I'm concerned with some of our personnel issues, especially on the defense. Mike Rallis is probably our best linebacker and he has been missing time with injuries. Keanon Cooper was knicked up on Saturday missing a lot of snaps in the second half.

Our secondary is a mess and we have a D2 transfer who might start on Saturday along with 2 true freshmen who have been playing a lot without a ton of success.

After being high on freshman safety James Manuel to start the season, Brewster has gone away from playing him. Junior Christyn Lewis was Manuel's replacement, but Lewis was benched as well Saturday.

The good news for the secondary is that Wisconsin is a ground oriented team, though they may try to exploit our secondary early and then pound us on the ground. On the plus side Gary Tinsley has been improving and it was nice to see Michael Carter have some success after getting back on the field.