Tip of the Hat to the Offensive Line

Share All sharing options for: Tip of the Hat to the Offensive Line 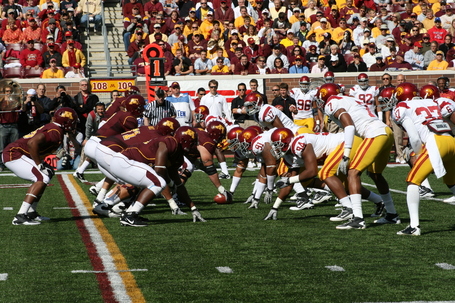 This will surprise nobody but there has not been very much to praise about the Gopher's 2010 season. The team has a 1-4 record losing all of our games at home, the defense is playing at a level of badness that we never thought we'd see again and the end of the Brewster era appears to be more and more likely with each passing loss.

But I want to take some time to give a slight tip of the hat to the Offensive Line. The men in the trenches took a severe beating in the eyes of Gopher fans on message boards and blogs last year. They received much of the blame for the ineptitude of the offense. The run game was at the bottom of the Big Ten because there were no holes for our backs. Some would adamantly argue that Adam Weber had a terrible junior year because he was running for his life on every other play and the line was last in the Big Ten in sacks allowed. And drive after drive was killed by penalties which were often holding or a false start. And let's be honest, they truly were a significant contributor to the ineptitude of the Mulligan Offense of 2009.

But I want to take some time to acknowledge that this group is much improved. Are they going to collectively win any awards for being the top unit in the Big Ten? No, and I'm not campaigning for that. One year ago this unit seemed to be doing their best to prevent W's but in 2010 they are doing their best to help us win.

The personnel is not exactly the same but it is very similar. Jeff Wills at RT was the starter in 2009 and he took more abuse from fans than anybody else (and it wasn't even close). Time after time WIlls was beat by a speed rushing DE and he gave up far too many sacks. This year though? While I don't have the numbers of sacks allowed by individual player you do not see him isolated on replays for giving up pressure or sacks nearly as often as you did last year.

At RG the starter remains the same with Matt Carufel. The Notre Dame transfer wasn't really abused in 2009 but he also didn't open holes for the ground game like he was expected to. He is much better this year at creating holes for his backs and pushing people around a bit more.

D.J. Burris started at center for the final seven games of 2009, afterTow-Arnett went down with an injury. While I can't say I've been watching him every play to see his progress, you also haven't seen him highlighted for too many penalties or sacks allowed.

The LG was "anchored" in 2009 by Chris Bunders and he's the starter there in 2010 as well. I do recall specifically watching Bunders at times last year and defenders would run right by him for QB pressures or sacks. He's playing much better this year.

Last year LT was a mess with starters rotating in and out of this critical position. Dom Alford saw a lot of time there but was beat out this year by the redshirt freshman, Ed Olson. I watched Olson critically in the MTSU game and he missed some blocks and allowed more QB pressure than anyone else but even in just a few games he has really improved.

Mostly these guys as a unit have really taken some steps forward and it is really showing up in the numbers.

Statistics are my first destination when trying to show how the OL has improved. I looked at the 2009 season comparing the four non-conference games plus Northwestern to the 2010 season.

As you can see we are rushing for more yards per game and more yards per carry. The OL has only given up 5 sacks after allowing 11 through this point a year ago. In 2009 through these five games we earned a first down on the ground just under 38% of the time and this year is is over 43%. All of these numbers point to the fact that offensive line is doing their job.

Also in 2009 the offensive line was often the excuse given as to why our quarterback was struggling. There was some truth to that but in 2010 our quarterback has statistically been much better. If the OL was partly to blame last year then they deserve some of the credit this year, it's only fair.

None of this means that any of these guys are going to be a finalist for an Outland Trophy, I doubt any will even be recognized on an All-Big Ten team. This unit still has to face some pretty tough defensive fronts in the coming weeks and they will be tested. I doubt they'll dominate the line of scrimmage this week against Wisconsin or Ohio State or Iowa, but I also believe they will not be pushed around like they often were in 2009.

This group has improved and after taking a lot of heat in 2009 I think it is appropriate to recognize they did indeed improve and are playing solid football through fives games. Unfortunately the 1-4 record is all that matters right now, but it doesn't hurt to give a slight tip of the hat to the OL.