Gopher Basketball inks part one of the 2011 recruiting class

Share All sharing options for: Gopher Basketball inks part one of the 2011 recruiting class

The Gopher men's and women's teams have each inked two members of their 2011 recruiting class.

Most of you are aware that Tubby inked a couple of athletic kids to fill the shoes of departing seniors Al Nolen and Blake Hoffarber.

"In Andre Hollins and Joe Coleman, we definitely feel that we helped ourselves," said head coach Tubby Smith. "Both of these guys are young men that you know are going to give you everything they have, every day, on the court and in the classroom. They will be great representatives and ambassadors for Golden Gopher Basketball."

Both of these guys should add some much needed athleticism to the backcourt of the Gophers in years to come. They both seem to be perfect Tubby Smith recruits. Both seem to be hard workers, strong defenders and both are athletic scorers. I anticipate both will be very coachable and should have excellent Gopher careers.

In basketball it is incredibly helpful to have that one offensive guy who can carry a team, an All-Conference player. I believe Coleman and Hollins are going to be very good players who are occasional 20 point scorers and both have the ability to take it another level and be the guy who carries the team. I'm not sure if they'll take that step or not but at the very least I think we have a couple of three-year starters who will be major contributors. 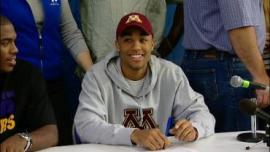 The Hopkins native is the state's #1 player, brother to former Gopher Dan Coleman and a is vital recruit for Tubby and the Gophers. Coleman is an explosive wing player who will add some athleticism to the Gophers. He is also known to be a bit more aggressive and physical than his older and bigger brother.

"Joe Coleman is an athlete and is a guy who can play multiple positions," said Smith. "He’s a slasher and a scorer and a guy that has an amazing worth ethic and is in the gym constantly. He’ll bring leadership to this team. I was so lucky and fortunate to coach his brother (Dan Coleman), so it gave us that insight into the Coleman family."

Of the three scouting services ESPN is the kindest to Coleman ranking him in their top 100 (93rd overall) and giving him a four-star rating. Here is a bit of what they have to say about him.

Coleman is an explosive athlete who shows no fear taking the ball to the hoop. He makes electrifying plays around the basket and is not afraid to attempt to dunk on anyone.

He is very athletic and explosive around the rim which allows him to make plays over or around defenders. He has a nice middle game and as is range increases so will his production. He rebounds well for his position especially on the offensively. Coleman is capable of defending both wing positions as well.

This is a really nice pickup from a number of angles. Most importantly Coleman is an explosive athlete who is capable of defending well and scoring. As he matures he'll need to extend his shooting range and improve his ball-handling a little bit and he should be a significant contributor very quickly in his Gopher career. I think it is safe to assume he'll play as a freshman as a complimentary player to what should be a strong senior class of Joseph, Sampson, Iverson and Mbakwe. Then beginning with his sophomore year he should be a focal point and key factor in the Gopher's success for three seasons. 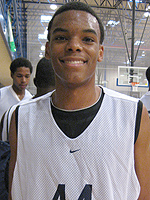 Hollins, like Coleman, comes from a very successful high school program. Memphis White Station is the defending Tennessee big class State Champions. As a junior he primarily played SG, in part because White Station had a five-star PG who is now a freshman at Memphis. But Hollins is going to be playing a lot of point this year and will likely come to the Gophers with the intent to replace Al Nolen.

"Andre Hollins is a very talented and athletic player. I think he fills that need that we haveat the point guard position," said Smith. "He is a big, physical guard that can defend multiple positions. One of the great things about Andre is that he has the mental IQ to run a team. He has speed, great hands, strength and love for the game."

ESPN also is very kind to Hollins ranking him as the 86th best overall prospect and giving him four stars as well.

Hollins takes an old-school approach to the game that a coach would love. He is a blue-collar guy at the SG position who laces them up tight every time he steps between the lines. He has good range on his jump shot out to 24', but his game is attacking the rim off the dribble. When he sees an opening he attacks like he is shot out of cannon. Defensively, he really sets down in his stance and moves his feet well.

This is another very nice pickup that is going to greatly increase our athleticism and speed. Imagine our backcourt of Andre Hollins at point, Joe Coleman at SG and Austin Hollins at SF. That is a long and athletic backcourt that will be able to defend anyone and it should be much more dynamic, getting into the lane and scoring more often than our current backcourt.

Technically we have used up all 13 scholarships for the current class, as you can see below. But that doesn't necessarily mean we are done. There is speculation that Rodney Williams is going to be a lottery pick this spring and you just never know about transfers, injuries, suspensions and academic casualties. I'm sure the Gopher staff will spend the next several months until the spring signing period trying to land another quality forward (small or power). Another PG wouldn't be terribly surprising unless they are 100% convinced that Hollins is the answer at point. And I also wouldn't be shocked to see them hit the JUCO ranks pretty hard (SF-Carlos Emory). The current sophomore class is a class of one and he likely will be leaving early, adding a player to that class wouldn't be a terrible idea.

It is also worth noting that we have four scholarships available for the 2012 class. Maybe we'll be done with this class and get an early start on filling up the next class. With that class I expect it will be forward and center heavy. Probably a couple forwards and SF/SG and another big man. Some 2012 names worth remembering...

There are others that the Gophers have offered or have shown interest in but it is too early to really make a list with any sort of accuracy. The guys above are local products who have had interest from major schools and a few regional guys known to have Gopher interest.