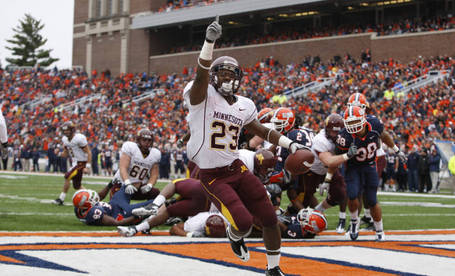 FINALLY, a Monday following a Gopher victory. That was fun to watch an entire game where the Gophers were competitve and even found a way to pull out a win. We are 2-3 on the road this year and winless at home. But the best news of all is that we are not in last place in the Big Ten!

Phil Miller captures the euphoria that the team experienced on Saturday...

This wasn't a celebration, it was a demolition, a TNT keg ignited under a season's worth of calamity and disappointment.

"Everybody is so happy, so emotional," said running back DeLeon Eskridge, who provided the catalyst Saturday with three touchdowns, the last one coming with only 16 seconds remaining to cap Minnesota's fourth-quarter rally and deliver a startling 38-34 victory over Illinois. "It's good to see the coaches crying."

Good for those guys to finally get that monkey off their backs. Think they can carry this over for two weeks and play with some from freedom in the Iowa game? Think they can pull off what would be the best win in several seasons?