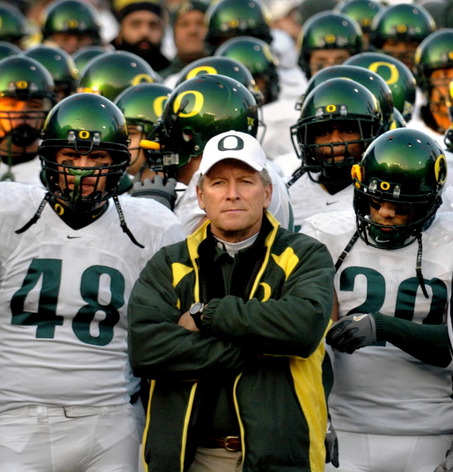 Let's take a closer look at former Oregon Ducks head coach and current E!SPN analyst Mike Bellotti. As you'll see, Bellotti has been ridiculously successful at a BCS conference school, and yet is never one of the first names mentioned among Gopher fans for the head coaching vacancy. I count myself as guilty of that as well, but after doing research for this profile, well, let's just say I've become a very big fan of Bellotti.

Just look at that career record at Oregon. Of all the candidates mentioned for this job, and that includes Tony Dungy, he might be the most qualified. He has more career achievements in college football at a higher level than just about any other candidate who would, or could, be interviewed for this job.

While his career before he became offensive coordinator at Oregon in 1989 looks like nothing special, from 1989-2008 he helped build the Ducks from a struggling program to one of the best in the country. Rich Brooks was the head coach in Eugene from 1977-94, and really his career there can be looked at in two ways: BB (Before Bellotti) and WB (with Bellotti): in his 11 years BB, the most wins any Brooks team won in a single season was 6 games. That's it. In Bellotti's first two years as OC, the team won 8 games both seasons, and in 2004 the Ducks won their first Pac 10 title since 1957, and their first outright conference championship in the then 100 year history of the program.

Brooks would bolt for the NFL (where he lasted just two seasons as the head coach of the Los Angeles Rams), leaving Bellotti in charge to build Oregon football into the juggernaut you see today. In his 15 seasons as HC at Oregon he only had a losing record once (2004), won consecutive conference titles in 2000 and 2001, and led the school to their first ever 10 win season (which he did 3 times in 2000, '05, and his last year in '08) and the school's only 11 win season in 2001 (although I have a feeling that may change this year). Had Dennis Dixon not blown out his knee midway through the 2007 season (Oregon was ranked #2 in the country at the time and had already beaten USC, who at the time, was still USC) Bellotti could have had a chance to play for a national title. He was 6-6 in bowl games, the Ducks finished ranked in the final polls seven times, with three top 9 finishes, including a final #2 ranking in 2001 after thumping the #3 ranked Colorado Buffaloes in the Fiesta Bowl.

Bellotti's teams set all kinds of school offensive records (all of which will fall either this year or soon under Chip Kelly, but still), yet despite all of his success as an offense coach, for the 2007 season he still showed the foresight (and really the humility) to bring in Kelly (who had been setting offensive records at New Hampshire) to run an offense that had already worked very well, and change it for the better. Two years later Bellotti decided to hang up his coaching spurs and move upstairs to be athletic director ala Barry Alvarez, and handed the reigns to Kelly, who is only in the process of revolutionizing offense in college football (don't believe me? Watch how many teams try to incorporate the lightning-fast pace of Kelly's spread offense. It's the new spread or west coast or wishbone offense), and may very well take Oregon's program another step beyond where Bellotti had it.

In doing research, I couldn't find a ton of information on Bellotti's recruiting prowess, but if he seemed to always have good teams at Oregon, his recruiting classes had to be solid, and he clearly knew how to coach his kids to fit his system.

We're really "picking nits" to find reasons Bellotti wouldn't fit. It's the usual drivel about him not being a "Minnesota Man" and not having any ties to the Big Ten or the Midwest. He certainly DID have six years as OC at Oregon to learn about their culture and Pac 10 recruiting and everything else before becoming head coach, but I can't imagine it would take him much time to figure out what it would take to win here at Minnesota.

He was underwhelming as a head coach at Chico State with a sub .500 career record there, so a legitimate question could be made of whether Oregon was just the perfect situation, and whether he could rekindle that magic at another school?

The only other real question about fit is whether he would want this job or not. He did respond a couple of weeks ago saying he'd listen to offers, so it's apparent he wants to get back into coaching, but so far there's been nary a peep about whether he'd be willing to coach the Gophers next season. There's also the question of how he retired as Oregon's coach to be the AD, then quit less than a year later. That may be a pattern of behavior that would worry some folks, but personally, it just looks like a classic case of "the grass is always greener."

Really, no different than a coach like Rich Brooks leaving a great situation in Eugene to be an NFL head coach. Or Steve Spurrier, Nick Saban, or countless other college coaches who leave good college jobs for NFL glory then find out it's not what they thought. In Bellotti's case, his greener grass was as an athletic director, thinking that head coaching was out of system and something he no longer wanted to do. According to SB Nation's Addicted to Quack and E!SPN.com senior college football writer Ivan Maisel, it didn't take Bellotti long to realize he missed college football, and being an AD wasn't what he thought.

From current head coach Kelly in 2009 when Bellotti announced his resignation:

"He wanted to get back in football. That's the impression I got," head coach Chip Kelly said Friday. "He's really, genuinely excited about the opportunity. I'm happy for him. I'm sad. I had one of the best situations. When your AD actually understands what it's like to be football coach, it's great."

Despite leaving his post in less than a year, AND leaving in a very tumultous time for the athletic department (Bellotti had just fired basketball coach Ernie Kent and there were some NCAA issues with the football players, most notibly star QB Jeromiah Messoli's missteps which eventually got him booted off the team), it's hard to find anyone around the Ducks program who has a bad thing to say about Bellotti. They all seem to be understand of his change of heart, and I would hope the U's administration would be too.

Really, what's not to like here? That he has no ties to Minnesota or the Big Ten? I don't put as much stock in that as some people, but let's just remember Tubby Smith had no ties to the Gophers, and he's worked out well so far. Urban Meyer and Nick Saban had no experience in the SEC before they took jobs at Florida and LSU. Mack Brown had no real Big 12 experience (unless you want to count 3 years at Iowa State as a position coach 17 years before he became Longhorns coach) or any ties to Texas. It's all worked out OK for those guys and those schools. Bellotti similarily would have zero problems adjusting to life in the Big Ten if he decided Minnesota was the right job.

I also like that he has success using more than one offense, which means he'd walk into the job and find the best offense to suit the talent we have here, rather than pull a RichRod and try to run HIS offense even if the players aren't here to run it. While his teams weren't known for their defense, they weren't bad either, and produced some solid NFL caliber players like the Baltimore Ravens DT Haloti Ngata. Bellotti proved at a BCS conference school that he could compete by recruiting players to fit his system, and then coach the hell out of them when they got to Eugene. He took a mediocre program that was on the rise, and took it to heights never before seen by Ducks fans. Sure, the situation isn't exactly the same here, as the Gophers are going the opposite way that Oregon was when Bellotti took over in 1994, but he's still won more in a bigger conference than just about any other candidate available.

Clearly after researching Bellotti, I've become a big fan. If he's not #1 on my list right now, he's certainly climbed into the top 3 or 4. If he wants the job, and is ready to put his heart back into coaching, Joel Maturi and the Minnesota Gophers would be hard pressed to find a more experienced, and more qualified, candidate.