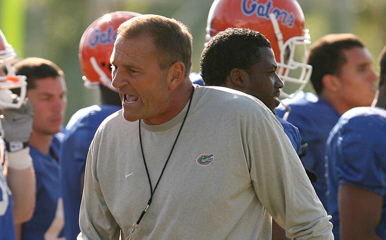 Dan McCarney might be an unfamiliar name to most Gopher fans, especially the younger ones. But he fits a lot of the supposed criteria. Let's get to know Dan McCarney.

As you can see McCarney has a Big Ten history and spent all but four years of his career oh so close to the state of Minnesota. He played and coached at Iowa, he coached at Wisconsin and he spend 12 years as a head coach at Iowa State. He then resigned and moved south to recruit and coach defensive lineman.

McCarney first and foremost has head coaching experience at a BCS school. At Iowa State he really struggled out of the gate but the Cyclone administration was patient with him and eventually he led them to five bowl games in six years. ISU has challenges but after some time McCarney had the program playing defense and even won a Big 12 North title in 2004.

Secondly he is a defensive guy. This isn't at the top of everyone's list of priorities but I for one would love to witness a Gopher defense that is capable of stopping someone, not just a hope that the opposing offense stops itself. Even outside of his time at Iowa State he has been known as a bright defensive mind. He greatly contributed to a defense at South Florida in 2007 that was third nationally in tackles for loss. That one season was enough for Urban Meyer gave him a call to come up to Gainesville in 2008.

Lastly he seems to fit the Joel Maturi profile. McCarney spent a few years under Barry Alvarez down in Wisconsin. And since Maturi has fond memories of his time in Madison and has great respect for Barry Alvarez one would assume McCarney would get a nice recommendation. McCarney also spent a long time at Iowa and of course Iowa State. So he's never actually spent time in Minnesota but if he doesn't get what it would take to make Minnesota a winner in the Big Ten, I'm not sure anybody would.

As mentioned Iowa State was rather patient while waiting for McCarney to win. But they were REALLY patient. His first five years were one win seasons in the Big 12. Tim Brewster had more wins by the end of his third season then McCarney had after five seasons. He did eventually win but it took him till his sixth season to put up a winning record. We are not going to be that patient. This is really the biggest issue.

Again, if anything should keep him from being our next head coach, it should be the fact that it took him six years to win. He's also not exactly a spring chicken. He's not as old as Joe Paterno but he is 57. How long does he plan to coach? Who knows and I guess if we have the right guy I'd hire him at 57, but it is worth noting.

McCarney has some of the makings of a very good candidate. He has good experience as a head coach. He has an idea of what it would take to win at Minnesota. He's a bright defensive guy. And maybe the biggest thing is that he's beat Iowa! He beat the Hawkeyes five straight seasons (1998-2002)! That's great but mostly he figured out a way to win inspite of the challenges in Ames.

On the other hand he had a losing record. He left Iowa State saying it was time for a change. And it took him six years to produce a winning record. Maybe he's learned a lot under Urban Meyer? There are rumors out there that while at South Florida he outrecruited the Gator staff for a player or two. That prompted Meyer to call him up and offer him a job.

When all is said and done I do not think McCarney is going to be the guy, nor do I really want him to be. Maybe he'd be a good fit, he'd win a bit and he'd stick around till he retires. But there is a great chance he'd be yet another mediocre coach with mediocre recruiting classes and mediocre results. I don't want to rip him too much because I think there is a decent chance Maturi strongly considers McCarney.