The Original Floyd of Rosedale Surfaces

Share All sharing options for: The Original Floyd of Rosedale Surfaces 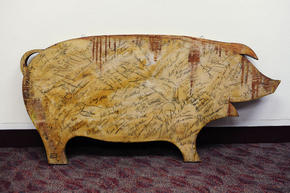 This is hate week and we are playing for Floyd. This is the last opportunity for the current senior class to win one rivalry trophy in their career as Golden Gophers. It is unfortunate that they were part of the Tim Brewster era that was unable to beat a ranked team or win a rivalry game. But that is a blog post for another day.

The original Floyd of Rosedale has surfaced. Here is the history in a nutshell, Back in 1935 when each state's Governor wagered a pig on the Gopher/Hawkeye game, some players on the Gopher roster procured a wooden cut-out of a pig.

A few players found a local butcher shop with a wooden sign shaped as a pig, and put it up in their locker room for teammates to sign. They brought it with them on the train to Iowa and were planning to give it to the Hawkeyes if they lost.

Patrin estimates that 70 percent of the team signed the pig, including All-Americans Ed Widseth and Bud Wilkinson as well as quarterback Babe LeVoir. Equipment manager Oscar Munson, who is famous for finding Michigan’s jug after they left it behind in 1903, which began the tradition of playing for the Little Brown Jug, is also featured on the pig.

The pig will be on display in the lobby of the Athletics Hall of Fame at TCF Bank Stadium this weekend only, and will be returned to Patrin afterward. I love the long and storied rivalries that the Gophers have with Michigan, Iowa and Wisconsin. Obviously they haven't exactly been competitive in recent years but they are still meaningful and a valuable piece of ours and the Big Ten's history.

Be sure to check it out on Saturday.