Gopher Football: Many Thanks to Go Around After Minnesota beats Iowa

Share All sharing options for: Gopher Football: Many Thanks to Go Around After Minnesota beats Iowa 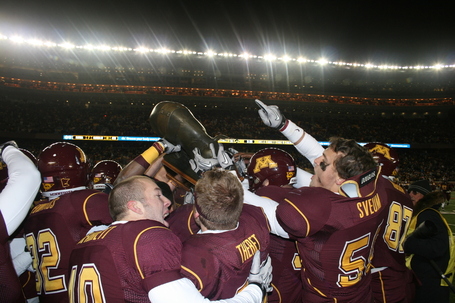 I have to admit- I went to bed Saturday night worried that I'd wake up Sunday morning and realize the Gopher victory over Iowa was a dream. I worried the same thing would happen this morning, but I'm happy to report it's been two days in a row, and we're still living in a world where the Gophers beat the hated Hawkeyes. The best part? That statement will be true for almost 12 more months!!!

Amazing what one win- the RIGHT win- can do, isn't it? Suddenly a 3-9 season feels a helluva lot better than 2-10 would have. I loved seeing GN's pictures of the game, and just how happy everyone was to be there. My buddy Joe, a lifelong Gopher fan like so many people, texted me a picture of he and his wife standing on the field after the win. I mean...that pretty much sums it up. A lifelong Gopher fan, at the end of a 3-9 season, grinning ear-to-ear. I feel the same way, and wish I could have been there on the field to celebrate with Joe and GN and so many others.

I know Thanksgiving was last Thursday, but I still have plenty of thanks to give out for the win over Iowa, and for the positive finish to the season. As a Gopher fan, I would like to thank the following people...

* Jeff Horton for an inspired month of November. We had hope once Brewster was fired that there would be change and hope for 2011, but you gave us something to cheer for and be happy about on the field in 2010. I can't thank you enough for that. I will never forget Horton's efforts, and will always remember him fondly. I hope this run to end the season lands him a good job somewhere next season. Horton accomplished the following in what had become a dreadful month for the program:

* All the seniors for all they put up with and all they went through in their time here. As fans we wanted better for you, and clearly you did too, and you couldn't have finished your careers any better. So thank you.

* All the players. All of them. Thank you for not quitting, and thank you for continuing to play hard even when it was clear you weren't going to a bowl game. Thank you for this victory, and I hope to see everyone who's eligible back next season!

* AD Joel Maturi and President Robert Bruiniks for having the guts to fire Tim Brewster mid-season. The season would not have ended this way had it not happened.

* I'm going to thank those same gentlemen in advance for NOT hiring Randy Shannon as our next coach.

* Defensive Coordinator Kevin Cosgrove. I was very, very hard on him all season (and rightfull so) for how putrid our defense was, but wow did they step up when they were needed most. Perhaps the most amazing thing about Saturday's win was this: the Gopher defense held Iowa to 218 total yards. Not in one quarter. Not in one half. But for the whole freaking game! Seriously, that has to be the most mind-blowing stat of the whole game and whole season. They also forced two turnovers. I don't know how much of that is Cosgrove, and how much of that was the guys playing their last game of the season and last game for this coaching staff, but I'll thank Cosgrove none the less. Now please clean out your desk and head for the exit. Thank you, Kevin.

* Finally, thanks to all the Gopher Football fans. For everything Brewster put us through and everything Gopher fans have endured in the last decade, and for some, the last five or six decades, Saturday's win was deserved. So smile today, tomorrow and into the offseason, and enjoy being a Gophre football fan, because you deserve it.