Everybody loves brackets and we all have opinions on the search for the next great coach to lead our Golden Gophers. Well it is time that you all have a say in the matter (and by having a say I mean pushing a button on the internet as an anonymous lurker and the results of said button pushing will have absolutely no bearing on the actual outcome of the coaching search).

Below you see the bracket we've come up with to help determine who the fans (at least those who frequent TDG) want as their next head coach. The voting will begin tomorrow with one of the play-in games and continue each weekday until we have a new coach determined. 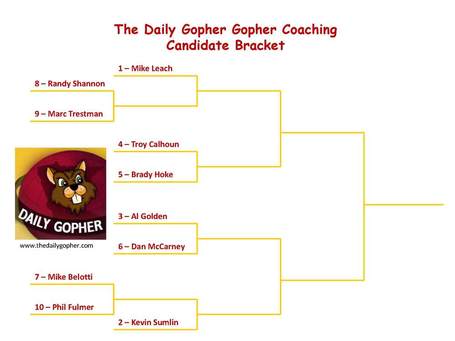 It should be noted that the list of 10 was carefully determined but as I pointed out when I listed 30+ potential candidates a few weeks ago the actual person hired very possibly will not even be on this list. So guys like Jim Harbaugh, Chris Peterson and Gary Patterson would be outstanding candidates who nearly all of us would vote through to win the bracket. But the likelihood that they'd be interested even in the slightest is minuscule. The Minnesota job is a step down for those guys. I know that Air Force fans will tell us that Troy Calhoun isn't going anywhere either, but at least an argument can be made why Minnesota would make some sense (more $$, a BCS school, not nearly the admissions challenges etc). So while he isn't a likely candidate he stays on the list.

The seeding was pretty arbitrary. It seems pretty clear that Mike Leech is the majority of Gopher fans' favorite making him the people's choice and the overall top seed. Kevin Sumlin appears to be a name that is being considered a very strong favorite so he makes sense as the second seed. Brady Hoke and Troy Calhoun makes for a good MWC matchup so I seeded them accordingly. Al Golden and Dan McCarney are a couple of non-sexy, defensive minded guys that seemed to make another good first round matchup. Mike Belotti and Phil Fulmer are the two old guys currently not coaching. And that left Randy Shannon and Marc Trestman who have received some attention as candidates but most Gopher fans don't seem too thrilled with their candidacy.

MOST IMPORTANTLY...when voting you are not to vote on whether or not you think we'll hire the candidate. You are VOTING FOR WHO YOU WANT as the next Golden Gopher head football coach. The voting will kick off tomorrow!

Anyway it is time to let they people speak, tell us Gopher fans who you want to be the next Golden Gopher Football head coach.