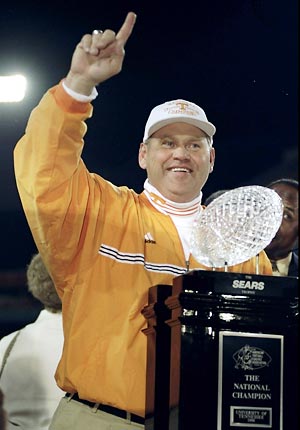 Phil Fulmer is the latest hot name to be mentioned for the Gophers head coaching vacancy. It seems every week we get a new guy who is almost definitely-probably-certainly-maybe-absolutely-according to multiple sources close to the coach who may or may not exist-THE next Gophers head coach. Rivals.com Tom Dienhart is a respected name, and Tweeted yesterday about Fulmer. Let's learn a little more about this week's candidate de jour, shall we? Oh we shall!

Um yeah, have you looked at all of those accolades? The man won a National Championship in the SEC, Tennessee's first since 1967. He won two conference titles. He won the toughest division in any conference 6 times, which is convenient considering whomever coaches the Gophers next season will be coaching in the new toughest division in any conference, and with Wisconsin as a crossover game, might well have the toughest conference schedule of any team in the country.

...He got fired from his last job. While Bellotti retired with much fanfare, Fulmer was pushed out by Vols fans and administration. Despite all he had done for the school, his record and accomplishments weren't considered enough. From a CBSSports.com article in 2008, the season he was fired:

At the risk of piling on, it should also be pointed out that UT has lost at least three games in seven of the past eight seasons, not finished in the top 10 since 2002 and signed recruiting classes ranked outside the top 20 in two of the past three years...

...Fulmer is now 4-12 against Urban Meyer, Nick Saban and Mark Richt, and those coaches don't seem ready to slow or stall soon.

Essentially, Fulmer was a victim of his own success. He brought Tennessee back to greatness and the summit of the college football mountain Rocky top, but when his teams slipped to mere goodness, the fans turned on him. So in 2008 after his second losing season in the past four, he was gone. Like fans at Michigan who grew tired of Lloyd Carr's sustained goodness instead of greatness, they forced out a national championship winning coach...and thus far aren't looking great for doing so. RichRod is yet to get the Wolverines even close to where Carr left them, and the same can be said for both Lane Kiffin and first year coach Derek Dooley.

Regardless, Fulmer failed to meet expectations and was sent packing. Despite interviewing for coaching vacancies the past couple of seasons (most recently the Louisville job last year, which went to former Florida DC Charlie Strong. Remember him Gopher fans? The guy we could have had instead of Brewster?) Fulmer has not been hired. Are other programs worried he's too old (He just turned 60. For some that's too old, for others, myself included, it says he still has at least another decade of coaching in him)? Are they worried his best days as a coach are behind him? Are the worried that because he was essentially not just an SEC lifer, but a Volunteer lifer, that he'd have trouble adjusting to another conference and region and program? Clearly he has zero ties to Minnesota or the Big Ten, so again, for those who thinks that stuff matters at all, that could be a knock on him. It's also clear he was unable to maintain high standards he had set in the 1990's.

And then there's his personality. Fair or not, he's never been known as an exhuberant, outgoing individual. The word "boring" has been brought up more than a few times when it comes to Fulmer. Despite his track record of enormous success, would hiring Phillip Fulmer excite the fanbase the way, say, a Mike Leach would? You tell me.

As commentor Sportsnight pointed out in the comment thread, I have no idea how I missed The Fulmer Cup. When bloggers name an annual award after you that goes to the team with the most off-field issues and player arrests every year, I'd say that's definitely a negative, and one I should have included when I wrote this.

Fulmer certainly isn't the sexiest choice, and I don't think naming him as head coach would have fans lining up at the box office for season tickets. But there isn't a more proven, experienced, and accomplished coach available, and he hits all of the points AD Joel Maturi has been talking about. He's an experienced head coach who has won at a high level, he's got a reputation as an excellent recruiter, and Maturi might be the one person who likes a boring coach because he'll be anything but controversial. It also means Fulmer wouldn't boast about taking the Gophers to the Rose Bowl or winning national championships in his opening press conference despite accomplishing nothing like our last coach.

Fulmer fits all of the criteria in Maturi's search, and the rumors of him as the next coach certainly make sense. He doesn't excite me as much as younger candidates like Leach or Golden, but he'd make me feel much better about our chances than someone like Marc Trestman or some NFL or college coordinators with zero head coaching experience. A better question may be whether the U is the right fit for Fulmer? He's stated he wants to go to a program that's "committed to winning." There's few programs in the country more committed to winning than Tennessee, so Fulmer will know whether Maturi and President Bruiniks are REALLY as committed to winning as they say they are.

And for what it's worth, he mirrors Tubby Smith at Kentucky in so many ways it's eery. With all that both Smith and Fulmer accomplished for their SEC programs, it seems crazy as a Gopher fan that they were pushed out the door. But obviously there are a few programs in both college football and basketball who demand national championships, or at the very least conference championships, and if their current coach don't get them, they find someone else who will. Kentucky basketball and Tennessee football are two of those programs. Our Big Ten football brethren Ohio State, Michigan, Penn State, and Nebraska are four more. The expectations are different there, and just because a coach "fails" at a school like Tennessee, doesn't mean he couldn't do well here.

If you're still not sold on Fulmer as the head coach of the Gophers, I'll leave you with this: it's a few more numbers from his final 10 seasons at Tennesee from 1999-2008. You know, when he apparently wasn't "meeting expectations":

Minnesota fans, please raise your hand if you would NOT accept those accomplishments for the next 10 years of Gopher football? Anyone? Anyone? That's what I thought.