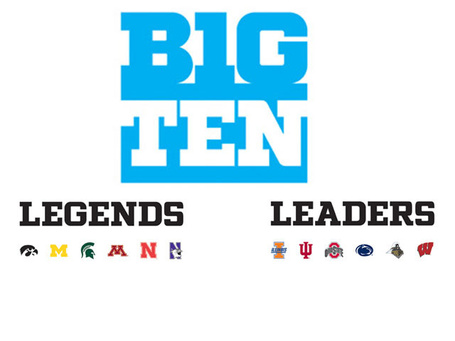 (Image courtesy of the Big Ten)

Well, what do you guys think of the new divisions and logo? Personally, I like the logo (more of them here), and think the division names are absolutely ridiculous.

Still, I'm sure I'll get over it. I'm never going to love them, but I understand the conference was in a no-win situation once the logical idea of an east/west split went out the window. I preferred calling them either the Great Lakes and Great Plains divisions, or just naming them after famous players or coaches. Sure, the other 10 teams who's great player/coach the divisions weren't named after would have been upset at first, but it would have been better than Legends and Leaders.

The conference DID come up with some new trophies and named them after the many legends the conference has seen. I LOVE how they did this, incorporating two great players/coaches from the Big Ten's past who embodied the award. The Conference Championship trophy will be called the Stagg/Paterno trophy. The Championship Game MVP is the Grange/Griffin. I love it. So why didn't they just do this with the division names? Honestly, why couldn't we just have had the Stagg and Paterno divisions? Would ANYONE have been offended or upset by that (other than probably Michigan and Ohio State. But considering the divisions were built for them so they wouldn't have to play each other, they should shut the hell up about how and what they're named)? Or the Nagurski and Grange divisions? Anyone?

Three Gophers were honored by having their names placed on a trophy: Bronko Nagurski, Tony Dungy, and Darrell Thompson. Yes, I was as shocked as you that Adam Weber wasn't mentioned. Obviously a total outrage. Don't they know he passed for over 10,000 yards and started about 900 consecutive games? Anyway, the Defensive POY is the Nagurski/Woodson trophy (Woodson being Heisman trophy winner Charles Woodson of Michigan), the Humanitarian award is the Dungy/Thompson Humanitarian Award (former Indiana tailback Anthony Thompson), and the Freshman of the Year is the Thompson/Randel-El award (Darrell and former Indiana QB Antwaan Randel-El). Again, I think these are fantastic, and they did a good job naming all the awards. I just wish they would have done the same with the division names.

ANYWAY, now we can just focus on how cool it's going to be to have Nebraska in the Big 10, and to have them, Wisconsin, Iowa, and Michigan on our schedule every year. It's a tough schedule, but I love it. The division names? Not so much.