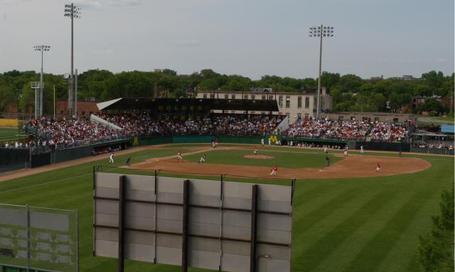 I am very excited to be writing a Gopher Baseball preview. Not just because football was mediocre and basketball has been disappointing, but baseball season means spring is nearly hear. It won't be long and we'll be wearing shorts, complaining about the humidity and heading to watch outdoor baseball.

We are all excited about the opening of Target Field. Everyone believes that Minnesota finally gets to experience outdoor baseball. What people don't realize is that we have had meaningful and competitive outdoor baseball for years. The Gopher baseball team is a perennial Big Ten contender winning 21 total Big Ten titles (four in the last decade) and eight conference tournament championships (out of 29 played). This year is no different as the Gophers are the preseason pick to finish second in conference just behind Ohio State and just ahead of Michigan. This team is also ranked in most preseason polls. Despite losing the Big Ten's MVP who wasn't actually voted MVP (Derek McCallum was ROBBED), this year's Gopher squad is deep, balanced and experienced. The 22nd conference title is achievable and this should be an entertaining Big Ten season. 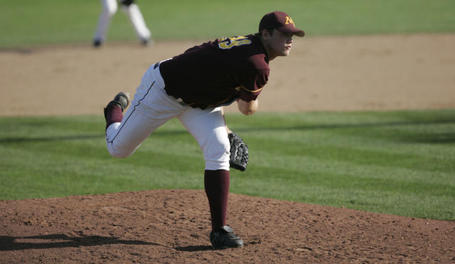 The front of t the rotation and back of the bullpen are about as good as you will find in the Big Ten. Seth Rosin (pictured right) highlights the starting pitching staff. Rosin is any pre-season All-Big Ten selection list you look at. CollegeBaseballInsider.com lists him as one of the three best starters in the Big Ten and Baseball America listed Rosin as the 4th best draft prospect in the conference. Last year, as a sophomore, the Shoreview native started 15 games and compiled a 7-1 record, had a 4.21 ERA (10th in B10) and struck out 65 batters. Rosin is the anchor of the staff and his continued success on the mound will be vital to the Gopher's run at Ohio State and the Big Ten title.

Rosin is the front end and Scott Matyas will clean things up in the final inning. Matyas is arguably best closer in Big Ten. He was a unanimous selection as best closer when CollegeBaseballInsider.com conducted their poll of college coaches. Matyas finished last season (his sophomore season) with a school record 15 saves limiting opposing hitters in Big Ten play to a .159 batting average. The North Prairie Wisconsin native should be as close to a sure thing in the late innings as there is.

The rest of the staff isn't exactly chopped liver, but they also are not household names either. I would expect that your 2nd and 3rd starters will likely be junior Luke Rasmussen and sophomore Austin Lubinsky . Rasmussen was a regular out of the bullpen last year during his sophomore season. He did not start even one game last year but with the majority of the 2009 starters gone I would expect that this workhorse will be given the chance to start. Rasmussen, a lefty, was also 4-0 with a 3.99 ERA in 22 appearances. Lubinsky was the only 2009 freshman who saw any innings pitched. One might expect that the sophomore stands to take the biggest leap in production this year. Lubinsky appeared in 15 games, started two and recorded a 3-1 record with a 4.78 ERA. Named to the All-Big Ten Freshman team, the LaCrosse native has the second highest amount of innings pitched returning.

After those four there are six other returners who registered innings in 2009. Some will be given shots at the rotation while most will be used heavily out of the bullpen.

Cullen Sexton should be our most reliable and is certainly our most experienced arm out of the bullpen (before Matyas takes over in the 9th of course). Sexton was 4-0 last season in 21 appearances and

Next on the list of possible starter who is Scott Fern who returns 33 innings pitched, 15 appearances and two starts as well. Fern was also 3-1 with a 5.18 ERA. He started a Big Ten Tournament game against Ohio State, which the Gophers won and advanced them to the championship game.

Dustin Klabunde, Allen Bechstein and Tim Ryan all pitched right around 22 innings last season. Ryan had the best numbers with a 4.09 ERA and opponent BA of .294. (OUT FOR SEASON with injury) Klabunde did have four starts but just a 1-2 record. Bechstein is the only senior pitcher on the staff, started three games last year and had the worst ERA on the staff with 9.27.

Last we come to Phil Isakkson who actually started three mid-week games last year but struggled to an 0-1 record with an 8.68 ERA in his seven total appearances. Isakkson is the only other left with any significant innings so expect him to get plenty of opportunities in 2010.

The pitching staff is very experienced and has some very good talent. 60% of innings pitched return but 51% of the team's starts are gone. So the question of who will lock down the 2nd, 3rd and occasional 4th starter roles is going to be very important to the 2010 Gophers. 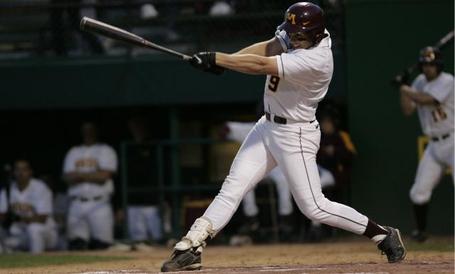 The good news is that the majority of the lineup is absolutely locked down and barring injuries you can pencil in 2/3 of your starting lineup for nearly every game. The bad news is that the three spots being replaced are positions that were held by three of your best offensive players in 2009. Derreck McCallum, Eric Decker and Matt Nohelty are not easy guys to replace in any lineup. But the returning lineup returns a good balance of power and on base guys that should score well.

Mike Kvasnicka (pictured right) is the best returning hitter in the lineup. The junior from Lakeville finished last season with a Big Ten rank of 3rd in doubles, 3rd in RBIs, 4th in hits and 5th in total bases. He is considered the third best pro prospect in the conference and should be the offensive leader for the Gophers in 2010. He will anchor down right field and get some innings at catcher when needed.

Center field should be anchored down by Justin Gominsky who was named to the Big Ten All-Freshman team and the Collegiate Baseball Magazine Freshman All-American team a year ago. Gonminsky, who is a VERY good defensive outfielder, played primarily in LF last year but should be the primary center fielder now that Eric Decker moved on to the NFL. Batted .338 a year ago, good enough for fourth on the team.

Left field is one of those spots that is open and this one is wide open. In the Pro-Alumni game two guys got the innings in LF, Brooks Albrecht and Ethan Liederman. Albrecht is a junior who saw action in 22 games last year though he batted just .158 in those appearances. Liederman is a redshirt freshman out of New York, NY who is expected to be in the mix for playing time. Also in the mix is true freshman, Andy Henkemeyer from Sauk Rapids. Fast kid who would be great asset in the field and on the basepaths.

Third base should be a secure spot for sophomore, Kyle Geason. The Eden Prairie kid had a very good freshman season where he started all 59 games, led the team in walks and established himself as an excellent defensive third baseman.

Shortstop will go to another very good defensive player, AJ Petterson. The same CollegeBaseballInsider.com article referenced here several times already named Petterson as the best defensive infielder in the conference. But not only is Petterson very good defensively, he was more than adequate at the plate as well. The Minnetonka kid was second on team in batting average, second in runs scored and had the fewest strikeouts. Petterson was second team All-Big Ten and received First-Team Freshman All-America honors at shortstop from Baseball America and the NCBWA. It will be hard to improve on his freshman season but Petterson should be poised to establish himself as one of the Big Ten's best infielders.

Second base is another unknown position for the 2010 Gophers. Redshirt freshmen Matt Puhl and Troy Larson are expected to compete for the starting role here. Puhl is a very tall middle infielder standing at 6-5! Larson fits the mold better and is a fast kid who would help make some noise on the basepaths. In the team's Pro-Alumni scrimmage Puhl started and Larson replaced him at some point.

First base will be anchored by sophomore, Nick O'Shea. O'Shea earned several awards during his redshirt freshman season including All-Big Ten Freshman team, Collegiate Baseball Magazine Freshmen All-American team and was named to Big Ten All-Tournament team. He started all 59 games and hit 11 home runs which was good enough for second on the team.

Starting at catcher will be Kyle Knudson. (UPDATE: Knudson is injured but will play this season) The senior from Maple Grove is very reliable behind the plate as well as holding a bat at the plate. Over his career, Knudson has made 96 starts and as one of the few seniors on the team he is truly one of the clubhouse leaders. Knudson hit .296 in 2009, led the Big Ten throwing out 39.7% of stolen base attempts and was third on the team in RBIs. A very talented player who will be equally valued on the field as he will be off.

Starting at DH is also yet to be determined. JT Canakes is a redshirt freshman, and a lefty who started the Pro-Alumni game at DH and will also be in the mix for innings in the outfield. Junior Drew Harnish is a middle infielder from Texas who will also be in the mix for DH at bats and middle infield innings. Harnish played nine games last year though he did not record a hit in nine at bats.

Overall you have some very good power with Kvasnicka and O'Shea. You will get Gominsky and Petterson on base regularly. Kyle Knudson has been proven to be a clutch hitter. If Geason can take a couple major strides at the plate and the newcomers can find a groove with the stick this offense should be right on par with the 2009 offense that scored the second most runs in the Big Ten.

This is where the Gophers should really excel. John Anderson Gopher teams are usually very sound defensively and 2010 will be no different. Petterson, Gominsky, Gleason, Knudson and even O'Shea are one of the best defenders at their position in the conference.

This team will have a very strong pitching staff. The offense will be very strong through 2/3 of the lineup with a few question marks in there. And the defense will likely be the strongest in the conference. This team is talented enough to win the conference and make a small run in the NCAA tournament. There are a few questions that will need to be answered like how much are the #2 and #3 starters going to produce and can the replacements for McCallum, Decker and Nohelty produce even a little bit offensively to make this lineup feared.

The Gophers are playing their typical difficult schedule that is highlighted by a trip to Tuscaloosa for a two-game set with Alabama, #13 Louisville in the Big Ten/Big East Challenge and the Dairy Queen Classic featuring Oklahoma State. Then the final Big Ten series for the Gophers will be a trip to Ohio State where the conference title could be on the line. This series will be aired on the Big Ten Network.

I strongly encourage Gopher fans to get out and support this team. Gopher baseball is a lot of fun to watch and there may not be a better value for a family to get out and watch some outdoor baseball.