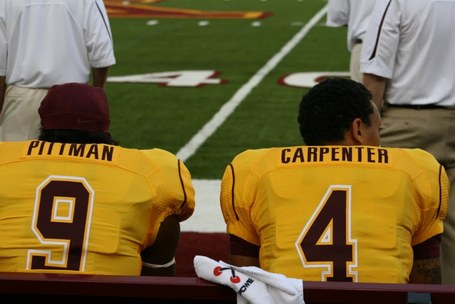 And finally the JUCO transfers. JG has astutely pointed out that Brewster has gone to the JUCO well early and often in his brief tenure as a Gopher. Defensively he has had some pretty good success. Tramaine Brock was one of our best players in 2008 before succumbing to academic troubles and not playing in 2009. Traye Simmons was 2nd team All-Big Ten as a junior and a two year starter, that is a successful pickup. Simoni Lawrence was quietly one of our best defenders in 2009 and a two year starter. Cedrick McKinley was a brute along the D line and will be missed this year.

Offensively however the results have not been so great. Jeff Wills might be the best offensive JUCO we have signed and his tenure as starting RT has been tenuous at best. The big name recruits, Hayo Carpenter and David Pittman have failed miserably at living up to expectations. And even if expectations haven't been met they really haven't provided any sort of contribution to the offense. Carpenter still has a chance to make some plays but the picture to the right so far deserves a big "FAIL" embedded on the bottom.

This year we signed four JUCOs. Three have are defensive and one large TE. Defensively I would expect that two will be major contributors immediately. This is hard to gauge as there is not as much info on these guys as you can get on high school recruits, but below is your four-man JUCO class this year.