An Early Prediction for the 2010 Football Schedule

Share All sharing options for: An Early Prediction for the 2010 Football Schedule

The stage is set for 2010 to be a benchmark season for Gopher football. Head coach Tim Brewster's recruits will finally make up the majority of the team and his plan for the program will be put to the test. TCF Bank will be entering a second season without the inaugural publicity of 2009. The schedule will feature some strong opponents. Success in 2010 could launch the program towards a successful future, but failure could submarine the program straight back to the 1990s.

Even though 2007 was a horrid season, Brewster's tenure has featured teams that are improving each year when strength of schedule is taken into account. Basically, the 2009 Gophers were about equal in strength to the 2001 Gophers.

As for 2010, how do the Sagarin rankings of the opponents on the schedule compare to prior years?: 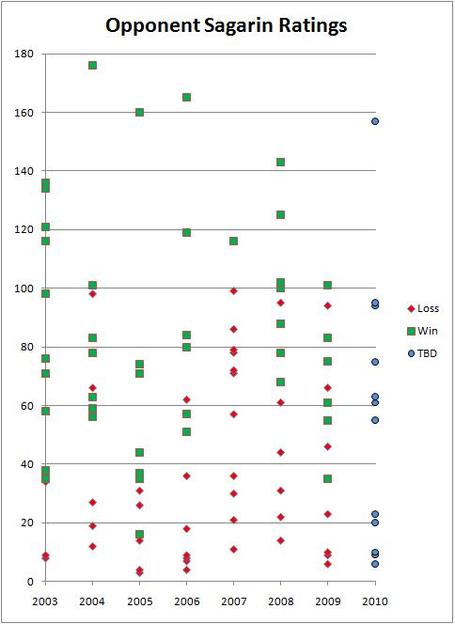 Historically, Minnesota rarely defeats a team that finishes the season in the top 40 of Sagarin rankings. Tim Brewster's lone top 40 victory was versus Air Force in 2009. If all teams (including the Gophers) field similar teams in 2010, the Gophers' record could be predicted as follows: 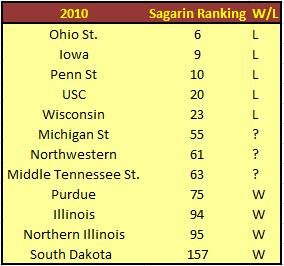 Using 2009 rankings as a comparison, there are five games that Minnesota will probably lose and four games that they will probably win. That would leave three games in limbo that could be the difference between 4-8 and 7-5. So, based upon a premature look using 2009 data, a 6-6 season wouldn't be all that bad and a 7-5 season should be the realistic target. An eight win season may be a long shot.

2010 will be the litmus test for the Tim Brewster era. If his recruits live up to their hype and will make for a better team than past regimes, this coming season will be looked upon as the historical turning point for the program. If the team does not improve over 2009, the future won't be so bright.

Since my glass is usually half full on these matters, I'll predict a 7-5 regular season that draws criticism from the usual suspects.