Share All sharing options for: Gophers host the Boilermakers - an actual preview

Easily the biggest game of the year for the Gopher basketball squad. Is that enough of a preview for you?

Other games have been big. The Wisconsin game got us out of the ICU but we are still not healthy enough for the NCAA Selection Committee to come near us. And a few close losses can be looked at as critical games that went the wrong way. But this game is huge. With the number of bad losses, and even OK losses, we have compiled; they absolutely need to wrack up signature wins if they want to make a statement that they belong.

The biggest game of the year deserves a real preview (we've been terrible at previews this year, for that I'm sorry).

Bad matchup after bad matchup for the Gophers. And the one that frightens me the most is Chris Kramer guarding Blake Hoffarber. Our offense really gets into a rhythm and scores some points when Blake gets and knocks down some open looks. Chris Kramer is one of the best defenders in the conference and you'll notice that Hoffarber had a grand total of 3 points when we last played Purdue. Granted this was a road game, where the Hoff never shoots quite as well, but not only was this his lowest scoring Big Ten game of the year but it was also the game where he attempted the fewest shots. If you are looking for a key match-up, this is it.

The Gophers have two options (and neither are very good considering how good Purdue defends as a team). Option #1 is to find another scoring option or two. Make Purdue have to worry about somebody else because they have the hot hand. Doesn't matter who it is, but somebody needs to take on the scoring burden. The other option is to do everything in their power to get Blake open. Run him off screen after screen after screen to free him up and just as importantly wear Chris Kramer out. 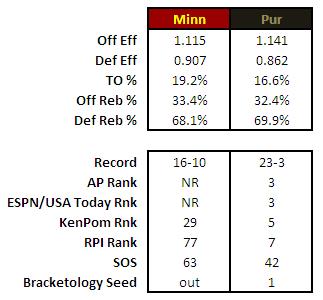 Also, not very encouraging. The Gophers play very good defense and they get by on offense. Purdue plays great defense and very good offense. There is a reason this is the #3 team in the country as they do all of the important things well. You may recall that when we last faced Purdue we forced them into 17 turnovers but shot just 30.8% from the floor. I expect we'll shoot much better in the Barn but I also do not think we'll generate nearly that many turnovers.

KEYS to the game

They know the stakes, they've been playing better lately and they can pull off this upset. As a fan I'm really hoping for a great game that is well-played and of course a Golden Gopher win.