A Tribute to our Golden Gopher Seniors

Share All sharing options for: A Tribute to our Golden Gopher Seniors

Lawrence Westbrook, Devron Bostick and Damian Johnson are preparing for their final regular season and Big Ten game at the Barn. Really this is probably not their final game at Williams Arena as they'll likely host an NIT game, but as far as the regular season goes this will be the last home game for Gopher seniors Damian Johnson, Lawrence Westbrook and Devron Bostick. It is only fitting to give a quick look at these three young men who have all contributed to the resurrection of Gopher Basketball. 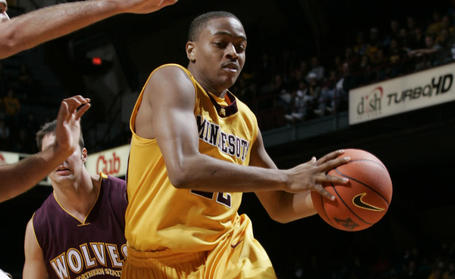 Devron Bostick's career as a Gopher was shorter than his senior cohorts. The JUCO transfer came in as part of Tubby's first full recruiting class that was highly ranked. Bostick was the NJCAA D1 National Player of the Year and many had hoped he'd provide an athletic scoring punch from the perimeter. The Wisconsin native had probably his most productive game as a Gopher last season down in Madison. 11 points and 3 boards in 21 minutes played in a key win over the Badgers. He had games where he registered more points and/or more rebounds but his overall contribution to that game was more valuable than at any other time as a Golden Gopher.

Bostick has seen his playing time decrease in his senior year, but he has played some key minutes in a couple Big Ten games and he has been ready to contribute when given the opportunity. 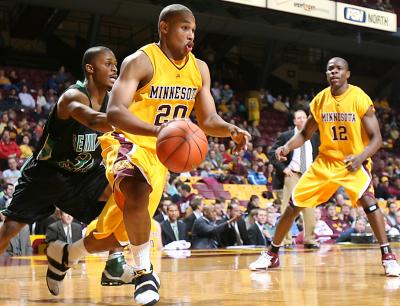 Lawrence Westbrook came to the Gophers from Winchendon Prep in Mass, but the Arizona native had remarkable season as a junior in high school. In that year he led the nation in scoring at 41 points per game breaking the Arizona single season record which had stood for 41 years! Of course most of you know that he is a cousin of Philadelphia Eagle's RB, Brian Westbrook. But Westbrook has been a very productive Golden Gopher who has had some huge games where he has carried his team to some key wins.

Westbrook became Minnesota's 35th member of the 1,000 Point Club and has steadily moved up the list into the top 25 of all-time Gopher scorers. Assuming he plays at least three more games as a Golden Gopher he'll make a strong push to surpass Michael Bauer and likely finish 23rd on the all-time scoring list. His assault on the Gopher record book does not end there. Westbrook is currently 7th on the all-time list of three-point FGs made, closing in on Voshon Lenard. With enough games he'll sneak into the top 10 for games played as a Gopher. He is 9th all-time in 3-pnt FG%. And is currently 3rd all-time in Free Throw %.

LW has often frustrating because of his inconsistent scoring and relatively high turnover totals. But it should not be forgotten how at times he has carried the scoring load and led his team to some big wins. He'll likely always be remembered for his 29 point game at Wisconsin last year that included the game tying 3-pnter at the buzzer and then finishing the game off with 9 points scored in the OT period. For my money his most complete game was the Big Ten opener this year when he scored 29 points on 11/16 shooting in a win over Penn State. Other notable highlights this year was the win over Ohio State where he hit 5/6 threes and of course his buzzer beating 2-pointer that pulled off the win at Penn State. Clearly he is the most capable scorer on the Gopher roster and that will certainly be missed. 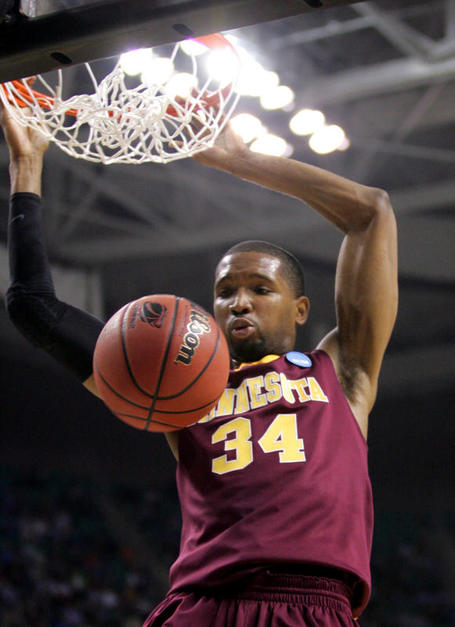 Finally we get to Damian Johnson. It was sometime during his junior year when the TDG community was trying to come up with a good nickname for DJ. The kid does so many things very well and though it was hard to nail down a nickname that adequately captured how much he does for us, eventually we settled on DJ Swat. You can see from his stats below that he is a factor in several areas each and every game. He scores, he rebounds, he blocks shots, he gets steals and he passes the ball. He is a prototypical "glue-guy" on the court and makes his team better by doing the little things so well. DJ Swat is one of my favorite all-time Gophers.

DJ Swat is also making his move up the Gopher record book. Knowing that he'll play tomorrow's Iowa game and then at least 1 B10 tournament game and 1 post-season game; he is guaranteed to finish top 5 in games played as a Gopher. He could move up as high as first all-time but that would require nine more games and that seems unlikely. Johnson is also solidified as a top 3 all-time Gopher in steals and blocked shots. Currently 2nd in steals with 186, needing 29 more to catch Melvin Newbern for 1st which seems unlikely. Currently 3rd all-time in blocked shots behind Kevin HcHale and Randy Breuer. He'll need 51 more to get into 2nd which also seems unlikely. But that is some select company especially considering he blocked nearly 200 shots in a small forward's body. You'll also notice that Johnson increased his production each and every season in nearly every category.

His 18 point on 7/8 shooting, 4 ast and 4 stl game in the win over Butler this year was a perfect example of what DJ Swat brings to the team. He recorded a double-double in a loss at Ohio State last year with 12 pts, 10 boards and 3 blocks. Johnson was rarely the leading scorer but as mentioned he did so many things well and is always a force defensively and was recognized as Big Ten All-Defensive team following his junior year. Johnson will be missed. His points can be replaced but everything else he does will have to be picked up by more than one guy.

During any coaching change and specifically in a time when a program is trying to upgrade the overall talent and raise it's profile both nationally and within the conference; the upper classmen are usually vital to getting things turned around. Often you will see a wave of younger players coming in who are more highly touted and often more talented. While it is their talent and athleticism that the program will soon rely on, the upper classmen always play an integral role in teaching these kids what it takes to succeed at this level. These guys will be missed and hopefully they've left something with the younger group that will help them to turn Gopher basketball into a Big Ten contender.