Get to Know a Golden Gopher - Aaron Fortunato

Share All sharing options for: Get to Know a Golden Gopher - Aaron Fortunato 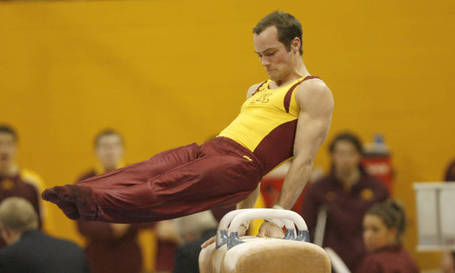 When I approached a member of the Gopher Athletic Communication Dept about this new series of profiles I wanted to run that would highlight the best and brightest of Gopher athletics there was little hesitation on his part suggesting who I should begin with. Aaron Fortunato is a gymnast for the Golden Gophers. He has been very successful in the gym, he stands out in the classroom and he is a fine example of a young man who will graduate with a degree and represent the University of Minnesota well the rest of his life.

Fortunato is currently competing in his final year as a Gopher on the Men's Gymnastics team. The Ohio native is a civil engineering major who has hopes of competing in the 2012 Summer Olympics. As I was getting to know Aaron I asked him how an Ohio native, who grew up Michigan fan end up competing for the University of Minnesota?

"The thing that sold me was the team. I knew our head coach, he was the asistnat coach at Michigan for a number of years and that's where a number of our regional camps were for gymnastics. Then he came up here and he started recruiting me.

I've never actually been an Ohio State fan, I was Michigan fan. I had a teammate when I was about 12, he went to University of Michigan so kind of grew up looking up to him and just sort of became a Michigan fan.

It came down to, my decision came down to here and Michigan, and Mich actually offered me more scholarship money. But when I came on my trip here I just loved it, the guys were great, the coaches are great. I loved the school, this is a really nice atmosphere that really made me feel at home."

His coaches must be thrilled that he made this decision as Fortunato has had a very successful career as a competitor and a leader. The senior is in his second season as a team captain and he is a finalist for the Nissen-Emery Award - the top award in men's collegiate gymnastics.

Fortunato is a standout in competition but I feel compelled to really highlight Aaron Fortunato the student before AF the athlete.

Participating in D1 athletics is difficult for numerous reasons. The vast majority of college students have trouble enough managing their time and keeping up their grades to stay on course to graduate. Add to that demands of daily workout routines, practices, travel for competitions and any desire to have a modicum of a social life and something usually has to give. It is no wonder you see college athletes majoring in General Studies or some contrived major designed to give the student athlete a chance at academic success. Fortunato didn't take the easy route when it came to college athletics. He is currently carrying a 3.77 GPA with a civil engineering major!

"I say it often that I wonder what I would do with an extra 20 some hours in a week. But I manage it, a lot of late nights. Sometimes for me depending on my schedule I'll try to work in homework before practices. It has definitely been challenging, my first semester sophomore year I kind of got into more engineering classes and it hit me a little as a lot more work. I couldn't coast as much as I used to. The fall of my junior year, I took 5 classes and averaged about 3 hours of sleep the whole semester. That really killed me."

In a typical week Aaron will actually adjust his practice schedule fit around his academic schedule. Monday and Wednesdays the team has strength practice in the morning. Monday through Thursday the team will practice 2:30 - 5:30, but on Tuesday's and Thursdays he has to come in and practice at 11:00. The individual nature of the sport helps to allow this as well as the fact that student athletes participating in the non-revenue sports tend to be the definition of student athletes.

The transition from high school academics to college academics is also something a typical freshman has to adjust to. As seems to be his pattern, Aaron had a slightly more difficult transition yet again. He was home-schooled in high school and the adjustment to what most of us know as a traditional classroom setting was a challenge, though not as challenging as expected...

The transition wasn't as hard as I thought it would be. So i got up here and I thought it was going to be a little more strange, having to go to lectures and stuff like that. But I actually liked it with professors going through examples and explaining things to me. The biggest thing was tests. I wasn't really used to studying that hard for tests. So that and not getting 100s on all my tests. My first test was a physics test and it kind of snuck up on me and I didn't study a lot for it and I got like a 70. Which was actually up at the top part of the class, but I was blown away I was devastated. Studying for tests and having due dates were the biggest things for me. Having those set deadlines was just a little different.

Sounds to me like mom was just an easy grader, but he assured me that was not the case.

NCAA's is a two day competition. The first day is sort of a regional competition (top 12 teams). After that there are two competitions with six teams each and then the top 3 from each session go into the NCAA Championships.

But it doesn't end with the NCAA Championships this weekend for Aaron, who is a senior.

It's been my dream since I was like 8 to go to the Olympics. so for me I'm planning to still compete and train.

USA Gymnastics has two big national meets. There was one in February which AF competed in and then there is another one in August. The year of the Olympics that Aug meet is moved up to June and they pick the seven man national team from those two meets. So as mentioned above he hopes to finish school this coming fall and then begin grad school work at the U so he can continue training and developing his routine as he prepares for his Olympic tryouts.

"I went out to the national meet in February. I had a really good meet, I found my consistency in competing. Kind of my consistency and my love for competing. I went out and had a good showing, but going out there an just seeing a lot of the stuff the other guys are doing, the degree of difficulty that's out there. So for me the big thing is going to be upping my start values, my degree of difficulty."

TDG - Is there one area in particular you will train for the Olympic tryouts?

"Probably still trying to do all-around, maybe looking at not doing one or two events kind of focusing on four. But the trend in gymnastics now is more towards all-arounders. In the past eight or so years its been geared more to events specialists, but it's going back towards more the all around guys."

For the record, I have been guaranteed another interview when he does in fact make the Olympic team. (I wanted to get this on the record)

When he is not training, studying or dreaming of building bridges what does Aaron Fortunato do? Besides the usual reading books and playing video games, AF doesn't quit there. A quick glance at his bio on GopherSports.com tells us that Aaron enjoys Revolutionaryh War reenactments.

"We started when I was 6 (or 4). It is a family thing, except my mom. We kind of kicked mom out for coming because everytime she came it rained and poured. We just go and camp out. We go there we set up the old style canvas tents, usually they'll have a battle on Saturday so basically it's all the authentic weapons, just black powder, it's all the tactical stuff and marching in a line. The unit that I'm a part of we do guerrilla warfare so we do a lot of running through the woods which is a lot better than standing in lines."

Of course my next question was who decides when people die and who dies when the blanks are fired?

"Some guys just love to be theatric and they are just like, 'I'm going down this time' so they throw their guns up in the air. A lot of times it doesn't happen till the end when you are out of powder so since you can't shoot anymore so I might as well die." 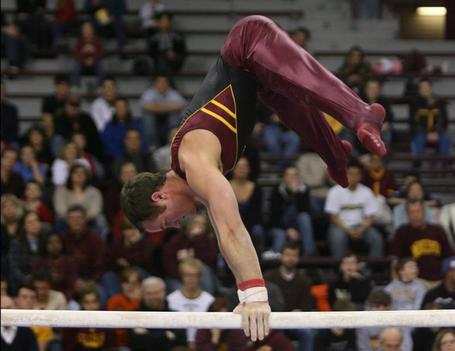 It is a little quirky, makes for some easy Halloween costumes and it sounds like fun and a good family outing for boys and their dad to do together. And in the event they ever decide to make a Patriot 2, the Fortunato family is prepared to be extras in the battle scenes.

When you see the NCAA commercials that air every 30 seconds during the NCAA Basketball tournament about the thousands of athletes who go pro in something other than sports, Aaron Fortunato is exactly the kid they are talking about. A smart, well-rounded, engaging and talented kid who is getting the opportunity at a cheap education. The collegiate system of providing scholarships to athletes was designed to work this way. He has been able to come to the University of Minnesota where he was able to get a great education, perfect his athletic skills and will in turn be a highly productive member of society whether that is here in the Twin Cities, back home in Ohio or anywhere.

This is what college athletics should be about. Best of luck to Aaron this weekend as he and the Gophers compete in the NCAA's, best of luck as he gets ready to make a run at being an Olympian and best of luck in the future when he is out in the work-force building bridges and keeping us all safe.