We Got Him - Maurice Walker signs with the Gophers

Share All sharing options for: We Got Him - Maurice Walker signs with the Gophers 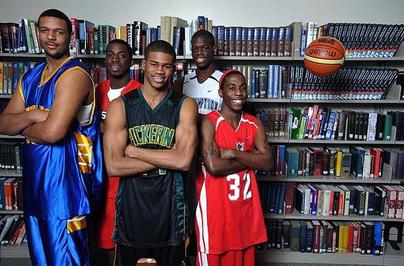 The spring signing period is open for NCAA Basketball and the Gophers have landed a huge recruit from Canada. Not THAT recruit who hails from Canada, but Maurice Walker (the big guy in the picture) is the third member of the 2010 Gopher recruiting class.

This from the U's Athletic Communication Dept.

"We have been involved with Maurice for a couple of years now. He has really developed into an outstanding player which is evident by the success that his team has had at Brewster Academy under head coach Jason Smith," said Gopher Head Coach Tubby Smith. "Maurice is an outstanding player with a high basketball IQ and is a very skilled. On top of that he is a great student and a fine young man. We are very excited to have him join the Golden Gopher basketball family."

Walker, a 6-10 senior center from Brewster Academy in Wolfeboro, New Hampshire, averaged 12.5 points and 10.0 rebounds as a senior in leading the Bobcats to a 35-5 record and both the Class A New England Prep School Athletic Council and National Prep School Invitational Championships. In doing so, Walker was named to the NEPSAC Honorable Mention Team.

Ranked as the 12th-best center in the class of 2010 by Rivals, Walker landed at Brewster Academy after attending Mother Teresa Catholic Secondary School in Scarborough, Ontario. On the court he finished the season with averages of 20 points, 14 rebounds and four assists and was named 2009 Ontario Mr. Basketball.

Walker is a large individual who should add a real physical presence in the middle for the Gophers. Comparison's have been made Texas big man, David Pittman mostly because of his size and soft hands. This is a very nice pick up for Tubby. Walker is ranked as the 12th best center of the class by Rivals and the 9th best by ESPN Insider. He chose the Gophers over Pitt, UConn and others.

A mountain disguised as a man, Walker has a huge frame and is absolutely immovable inside the paint. He uses his size and strength to consistently wear down the opposition, banging on both ends and clogging the lane defensively. He changes ends of the floor capably in straight lines but must improve his conditioning, has heavy feet laterally, and very little lift. Consequently, he's not much of a shot blocker and struggles defend the ball or hedge screens away from the basket. Offensively, he can power through virtually any contact to finish, has very soft hands, and does a nice job of establishing position on the block, but must learn to catch and finish quicker and better capitalize on his size and strength when attempting to create his own shot with his back to the basket.

Walker is gifted with the attributes of a very successful basketball athlete. He is very strong and has a huge frame to add muscle and tighten up as he matures. During the tournament this week he time and time again showed a relentless effort to bang inside with the men and his natural gifts served him well. He hammered down many impressive dunks in traffic and ran the floor very well for a man of his size. However, his ability to position himself inside and use his size effectively was very impressive. Not afraid of contact, this young man should have a very bright future at the highest levels. Right now, he needs to continue to demand the ball in the post as his teammates sometime overlooked this talented big man. His back to the basket jump hook and drop step are very polished going to his right hand, but he needs to continue to improve on some counter moves and going to his weak hand.

I really like the addition of Walker and look forward to what he'll bring over the next four or five years. The question will be what happens with him in 2010-11. With two true centers expected to eat up the vast majority of minutes and hopefully Mbakwe manning the PF spot, it will be hard to Walker (or Eliason for that matter) to earn any significant minutes this coming season. The loss of Carter opens up some minutes as we'll probably see a lot more of Sampson and Iverson on the floor together. But I'm sure you will see at least one of the incoming centers, if not both, taking a redshirt year in 2010-11. For Walker's sake a redshirt year to really get in shape and trim down those 270 pounds might be in his best interest.

This is all assuming Trevor Mbakwe is on the roster and playing. If he is unable to play then we will be playing a season with several centers and no power forwards so Walker and Eliason will be called on to contribute immediately.

The Rest of the Class

This pick up brings our total class to 3 signed players with one or two scholarships available (pending Royce White). We have picked up two centers and a shooting guard. Below is a table showing the current Gopher roster and scholarship allotment.

As you can see there is still one, potentially two scholarships available. Cory Joseph has one if he wants it (more on him below) and the only other likely candidate to grab a scholarship in this class would be Michael Haynes. 6'6", 225 forward who averaged nearly 20 points and 10 rebounds per game this past season for his prep school. Interest has really picked up for Haynes but Minnesota, Xavier and South Florida are reportedly the only schools to have offered. Duke and Oklahoma State have also expressed interest but nothing official.

The prize of the class is still uncommitted and would add a rock-star point guard to the class which would vault us into a top 20 recruiting class. Cory Joseph is one of the top three uncommitted players remaining and would transform this from a nice class to a great class. But it is hard to speculate on Joseph until he makes his decision from a list that includes Minnesota, Texas, Villanova, UConn and UNLV. The likely top 3 is Minn, Tex and Nova but there is a lot of misinformation and speculation out there. I like our chances but I'm not going to get my hopes up. Joseph is likely to announce his decision this weekend.