Share All sharing options for: Will Eric Decker be the 2010 S.O.D?

Former Minnesota Vikings running back, Onterrio Smith produced very little over the course of his career on the field. But that doesn't mean Mr. Smith didn't give back to society before his career came to an abrupt halt. If we were playing word association and I said "Onterrio Smith", I'm sure for most of you "Whizinator" is what immediately comes to mind. But let's not forget that Mr. Smith also gave us the term, S.O.D. which of course means Steal Of the Draft.

Which brings me to the point of this post. Will Eric Deckerbe the 2010 S.O.D.? Projected as a possible late second round pick, Decker wouldn't exactly qualify as a steal if he were to be drafted in the top 64 picks. At that point he becomes someone teams and fans will be expecting production from in 2010. But assuming his 2009 injury causes some concern among NFL executives and he falls into the third round, expect one lucky team to get great value with their selection of Eric Decker.

Like every other player expected or hoping to be drafted this weekend, Decker has some strengths and weaknesses. It comes down to Decker is the kind of player who grades out very high on intangibles and is a notch below many of the top receivers when it comes to the measurables. So lets take a look at each of these...

Decker is actually very solid in his measurables, he just doesn't stand out. He has very good size though guys like Dez Bryant and Demaryius Thomas are slightly bigger. He has good speed but guys like Golden Tate and Arrelious Benn are faster. And he is a strong receiver but guys like Damian Williams, Benn and Tate put up more reps when benching at the combine. Nothing about Decker stands out as red flags when it comes to measurables and conversely none of his measurables jump out as a compelling reason to draft him early.

As you can see Decker is strong, he is fast and he is big. What he isn't is the strongest, fastest or the biggest. What Decker brings is a very nice combination of size, speed, strength and grades very high when it comes to intangibles. 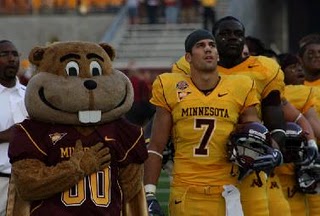 After talking about size and speed we move into the areas where Decker will really stand out. When you read draft profiles of Decker you read a lot about his toughness, leadership, route-running, hands and intelligence.

This was a great catch, be sure to wait until about the 48 second mark when they replay in slow motion. Another video here discusses the physics of the hit he took and how remarkable it was that he actually hung on to the ball. It should be noted that he came back and played that game despite getting his bell rung shortly before halftime.

On top of his toughness, Decker is a smart young man which translates and becomes evident on the football field. Despite doing well and earning accolades as a student at the University of Minnesota, Decker also recorded the highest score on the Wonderlich Test at the NFL Combine. A two-time Academic All-Big Ten performer and he earned a National Football Foundation Scholar-Athlete Award last year. It should also be noted that Decker changed offensive coordinators and playbooks nearly every season as a Gopher and managed to remain productive while others clearly struggled to pick up the complexities and nuances of the new systems.

The video evidence gives is a concrete example of Decker's "toughness" and his intelligence has been thoroughly measured. Many of the other intangibles are hard to quantity (which is why they are intangibles) so I'm going to turn to several draft profiles of Decker to illustrate the other areas where he demonstrates excellence.

Attacks the ball instead of waiting for it to come to him. Fearless going across the middle and can hang onto the ball after taking a big hit. Shows excellent sideline awareness. Also shows a good understanding to find open area off of QB scramble. Works hard to cover up defenders in the run game.

Does a nice job setting up defenders, sharply snapping off his routes. Extends his arms well away from his frame and consistently plucks the ball with his hands. Isn't a guy who will run away from defenders with the ball in his hands or make anyone miss in the open field. But he does a good job getting north/south quickly after the catch and fighting for yards through contact.

Decker is also one of the better run blocking receivers in all of college football. He runs very crisp routes and while he's not a burner, he does have very good speed for his size. He has a chance to be a very good possession receiver in the pros

He’s not the blazing speed guy that’s needed opposite Randy Moss, but there’s something to be said for being dependable, running good routes and knowing how to beat defenders. Decker, who lined up both in the slot and on the outside in college, has at least piqued the Pats’ interest

As you can see, Decker brings a lot to the table (or football field). I also feel compelled to point out that just because Decker is white and not super fast, does not mean he lacks athleticism. Last spring he was a center fielder for the Gopher baseball team and was one of their best hitters in the lineup on a team that earned a birth into the NCAA Tournament.

Overall, Eric Decker is going going to be a very good receiver at the next level. The further he falls the lower the expectations and happier people will be with his performance. I envision a much bigger and slightly faster version of Wes Welker at the next level. Now, I'm not predicting the same kind of production but so much of that is contingent on your quarterback and offensive system. He will be a very reliable target who gets open, fights for extra yards and will pleasantly surprise you with some big plays in and around the end zone.