Gopher Baseball on BTN this weekend

Share All sharing options for: Gopher Baseball on BTN this weekend 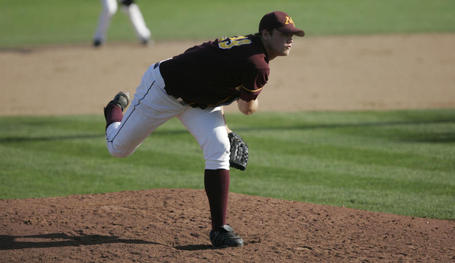 It has not been a particularly successful season for the 2010 Golden Gophers but they are still in the hunt for a high seed in the B10 Tournament and you can watch them live this weekend on the Big Ten Network.

All three games this weekend can be seen live on the Big Ten Network. Brett Stover will be the play-by-play announcer and former Golden Gopher J.T. Bruett will do color commentary.

Minnesota is tied with Illinois for seventh place at 4-5. The Golden Gophers are 14-23 overall after losing 12-11 at South Dakota State on Apr. 20. Minnesota is led by Michael Kvasnicka who is batting .352 with six home runs, 32 RBI, and leads the conference in walks (28) and doubles (15). Kvasnicka also has a .453 on-base percentage this year, is batting .447 in Big Ten play and carries a 12-game hitting streak into the weekend.

Minnesota will start Seth Rosin on Friday. Rosin is 3-3 with a 4.15 ERA and is third in the Big Ten in strikeouts with 49. He also leads the nation in fewest walks per nine innings at 0.32. Rosin has walked two batters in 56.1 innings. That is currently an NCAA Division I record for a single-season with a minimum of 50.0 innings pitched. Jim Weil from New Orleans holds the NCAA Division I record with two walks in 51.0 innings in 1976.

Freshman TJ Oakes will pitch on Saturday. Oakes is 2-2 with a 3.94 ERA and 31 strikeouts in 43.1 innings pitched. Oakes is 10th in the Big Ten ERA and leads the Gopher starters in the category. Sunday's pitcher for the Golden Gophers will be Phil Isaksson. Isaksson is 2-0 with a 3.94 ERA and has struck out 35 batters in 43.1 innings. He has limited the opposition to a .256 batting average, which is sixth in the Big Ten.

Indiana is tied for third in conference, just a game ahead of our Gophers. Things can change dramatically with a series win this weekend. The games will be broadcast on TV, but if anybody misses watching baseball in the Metrodome, here is your opportunity to get out and support Gopher baseball.