Share All sharing options for: Spring Game Recap - the Offense

First of all it was great to be watching some outdoor football at TCF Bank Stadium again. The weather held off nicely and the second half was even sunny. There were only 2,000-3,000 people on hand to watch the Gophers play the Gophers, but it was crappy weather for an event that is usually sparsely attended by Gopher fans.

The Jeff Horton Offense - Even though it is very early in the Horton tenure it appeared as though everybody was on the same page. The plays were diverse but nothing appeared too complicated. This is all very high level but I liked the diversity of run plays called, I liked that we ran a few screen passes, I liked that when it was a short yardage situation we ran the ball hard and the routes run seemed to give our quarterbacks good options. I love the use of screens to keep a defense on their heels and although the execution wasn't as crisp as one would like to see, I like that we ran a few screens throughout the day. Ultimately it really looked like the players were playing and not thinking. They still have the summer to get familiar with the playbook and the fall camp to improve execution but in the little we saw on Saturday, I liked what I saw. 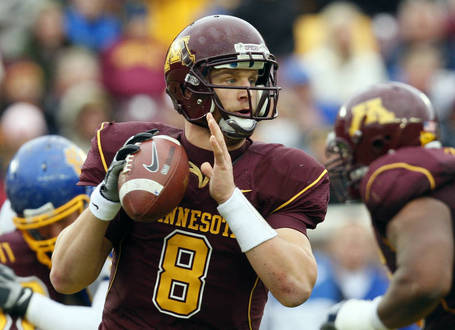 The Quarterbacks - this is the position that will divide Gopher fans faster than any other. My stance on the QBs is clear and well documented. But before I get into my thoughts on the spring game it should be known that I have nothing against MarQuiese Gray, in fact I would absolutely love for him to step up and be the man. He clearly is athletically gifted more than Adam Weber can dream about. If he is truly a play-maker and difference maker on the field I would want nothing more than to see him starting and leading the Gophers to a better bowl game than we have seen in recent years. I think all Gopher fans want to see better quarterback play regardless of who is under center and I think there is a large chunk of Gopher Nation who desperately want Gray to live up to the hype he was generating out of high school.

From what I saw in the scrimmage, Gray is simply not ready to start in the Big Ten at quarterback. This is more a statement on Gray's un-readiness than it is an endorsement of Adam Weber. Many believe that Weber is inaccurate with his throws on top of his insistence on throwing into coverage. There is some truth to those statements. But nothing from what I have seen in Gray would lead me to believe he would fare any better, in fact I fear it would be much worse. Here is what I mean.

When Weber misses a receiver, particularly in 2009, it is usually a ball thrown too low or slightly behind. Many times last year a receiver was open and the ball was thrown to his ankles or on the backside of his hip. Watching the scrimmage on Saturday Weber was better at this but not perfect. A slant pattern in the endzone was batted down because the pass was slightly behind the open receiver, had the ball not been touched it would have hit him squarely in the buttocks. Gray also missed receivers but his misses were completely uncatchable. A crossing route by Stoudermire saw #11 open by a couple steps with field in front of him. Gray was inaccurate, not by throwing to his feet or behind but overthrowing by a good 3 yards. A ball that was completely uncatchable. Another example was a Victor Keise fly pattern that saw Keise open by a couple steps and the deep ball was overthrown and uncatchable. 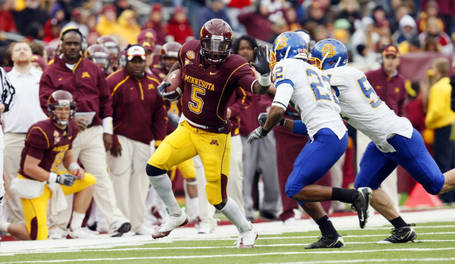 When it comes to reading a defense and forcing balls, Weber appeared to be better than last year though he still forced a couple balls to his new most trusted receiver, DaJon KcKnight. He did however ground a screen pass intentionally when it was covered and he threw a pass to Lair in the back of the endzone that would have been a very difficult catch but appeared intentionally placed to where only Lair had a crack at catching it. My armchair assessment is that Weber sees the defense but occasionally chooses to force balls when he shouldn't. Gray at this point in his career just doesn't see the defense. His lone interception was a crossing route about 10-12 yards deep. Keanon Cooper was sitting in his zone reading Gray and waiting for the receiver to come into his zone. Gray never saw Cooper and practically threw it right to him.

Weber was not perfect on the day. He threw a wobbly pass to McKnight down the sideline that was knocked out with a solid hit by Christyn Lewis. He threw a slant pattern that was nearly intercepted by Maresh. And his 40% completion stat is not inspiring. Gray also threw the 38 yard touchdown to Hayo Carpenter in the second half, to his credit.

But overall I don't see how you could watch the QB play on Saturday and come away with any other conclusion. Adam Weber is going to the starter and he should be the starter. Weber was given many more snaps (all with the first team), he was allowed a lot more pass attempts and with 2 min left in the first half he was called upon to run the 2-min offense (when it wasn't his turn in the rotation). All signs point to the coaching staff already deciding that Weber as your clear-cut starter.

I know there are many who say let Gray learn on the job. They'll take the good with the bad and accept the mistakes. That is fine to have this opinion but that just isn't going to happen regardless of where you stand on the quarterback debate. The coaching staff will go with who they think best helps them win this year

When Gray does get his chance I desperately hope they run plays that will best utilize him. There was 1 rollout play called when Gray was under center. This guy is incredibly athletic, get him out of the pocket and allow him to either hit the guy in front of him or use his legs to pick up some yards. We've seen that he can make big plays on the ground, when he gets to play QB I hope they don't forget that.

That was WAY more than I intended to type on this subject, I still have 5 or 6 other positions to get to! I'm sure this is where people will quit reading and go to the comments to rip me, but I'm going to keep going anyway. 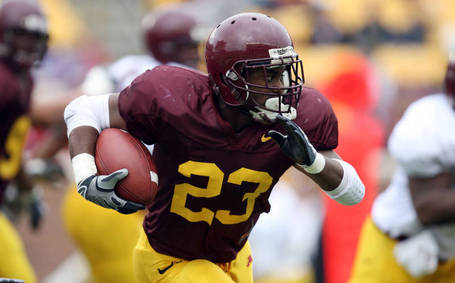 As noted by many, the first have was very good and the second half was very blah. DeLeon Eskridge (pictured right) and Duane Bennett combined in the first half for 97 yards on 16 carries. Sometimes there were nice holes and other times both backs were able to break a tackle or two as they fought for extra yards. Nothing stood out as giving me hope either back will be one of the best in the Big Ten. But both are quality backs who will be adequate. Not exactly a ringing endorsement but with improved play by the offensive line our running game will be much better than we saw in 2008 or 2009. Ultimately I was encouraged by the diversity of running plays, both backs received a fair share of the carries and both had their moments of running well. Neither are explosive or an offensive focal point, but they are solid and there is an infusion of young backs coming in this summer to compete for playing time. 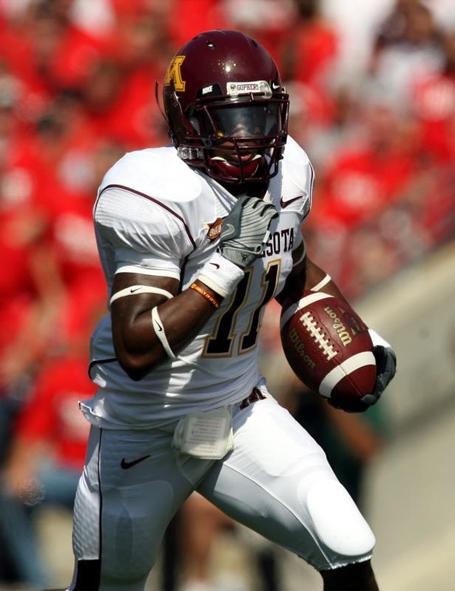 This group is becoming less and less impressive every time I see them (how is that for harsh?). It was subtle last year but there were several times when Brewster referred to this groups inability to get open and I think that is going to come out more clearly as we get into the season. Da'Jon McKnight is turning into the team's #1 receiving option and Troy Stoudermire (pictured right) is a playmaker as the #2 receiver. But both of them, along with Brandon Green, have work to do. There have been two primary issues with these receivers and they absolutely need to get better in these areas.

The first is their ability to separate from defenders and get open. Running crisp routes is one thing, being able to set up a defender to ensure that you are getting open for your quarterback is another. Quietly this was a significant issue last year. Guys didn't seem to have trouble getting open on Saturday but also the level of competition should be recognized. Hayo Carpenter's deep touchdown was against Chris Krajnik. And don't forget that both starting safeties were missing to go along with razor thin depth at corner.

Secondly dropped passes have, and continue to plague this group. This was evident on Saturday and just plain needs to stop.

To be honest I didn't focus on the offensive line all that much. Others have commented how Jeff Willis looks slimmed down, this is a good thing. And anecdotally the OL did a very good job protecting the quarterbacks and opening up holes for the running backs. This group has a lot to prove and everyone knows it. The fact that this is becoming an experienced group is always beneficial. I think they will be noticeably better in 2010, but how much better is yet to be determined.

All in all the offense looked very good in the first half. Adam Weber led the offense to a TD and then three consecutive FGs on his four possessions. Two big passing plays and 100 yards of rushing highlighted the first half. The second half was not nearly as productive for the offense and the lone highlight was a 38 yard touchdown pass from Gray to Hayo. The run game wasn't as strong, Weber regressed managing three possessions of 3 and out, Gray threw the games only interception and the offense managed the one TD and a 50-yard FG. Plenty to work on but it was just the spring game.