The Seantrel Henderson Sweepstakes - the drama continues for the USC Trojans

Share All sharing options for: The Seantrel Henderson Sweepstakes - the drama continues for the USC Trojans 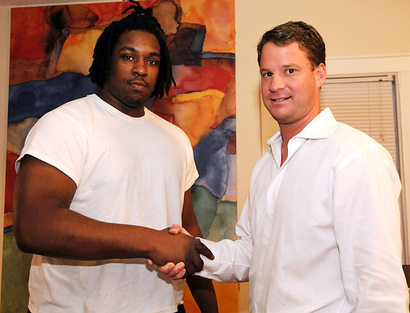 Reportedly, Seantrel Henderson wants out of his Letter of Intent to play football for Lane Kiffin and his USC Trojans. Last week Kiffin, the elder Kiffin, recruiting whiz Ed Orgeron, offensive line coach James Cregg and maybe even Will Farrell and Snoop (though that is unconfirmed and highly unlikely) took a jet to the Twin Cities when Seantrel failed to show up for USC orientation. The damage control committee returned this week to make a second pitch to the nation's #1 incoming offensive lineman.

Those are facts, now comes the speculation.

I think it is safe to assume that the Henderson's are upset about the NCAA sanctions and it appears as though they feel duped by the Kiffin regime when told that the NCAA sanctions would not be too severe. Now Henderson wants out and desires to play football for a school that will be allowed to play in a bowl game. To do that he'll need to be released from his letter of intent. Supposedly, that isn't going to happen anytime soon.

Making matters more difficult is that sources say the USC coaches planned to tell Henderson that they wouldn’t release him from his Letter of Intent. That could prove to be an issue for both sides; a person close to the situation summed things up perfectly: if Seantrel were really interested in playing for USC then he would already be in LA instead of spending his summer playing basketball around the Twin Cities.

It seems fiarly obvious that Henderson will not be a Trojan this fall. The USC staff can prevent him from playing somewhere else this fall but that doesn't mean he'll be in uniform. The relationship seems to have soured. Where he will end up and when he'll be able to actually play are the next obvious questions that will need to be answered.

What is very interesting is that the Kiffin-Orgeron dynamo has landed the nation's #1 recruit two years in a row and it looks like they'll be 0-2 when it comes to getting that player on the field.

When it comes to Henderson's next destination, I don't think Gopher fans shouldn't get their hopes up. It seemed pretty clear that Minnesota was not Henderson's second choice and it is also not clear if the Gophers can even accept Henderson after self-reporting minor recruiting violations surrounding his recruitment.