Share All sharing options for: Gophers upset Fullerton in regional 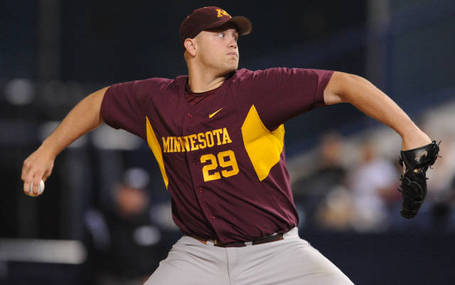 The Gophers scored 3 runs in the top of the 1st and that was all Seth Rosin needed as he was spectacular as the Gophers upset the Titans 3-1.

Rosin pitched 8 innings giving up just 3 hits, 1 run and fanned 7. It really was an impressive performance against the region's host and #1 seed.This from Gophersports.com

Rosin dominated from the start of the game, as he faced the minimum number of Titans through the first five innings. When he left after pitching eight innings he had only faced two batters above the minimum. At one point, Rosin retired 12 straight batters between the second and fifth innings. He did not walk a batter the entire game, and struck out seven batters in the game. With the win, Rosin moved to 9-4 on the season. He has now won his last five decisions.

Kyle Knudson was 3/4 and drove in the game's first run as he continues to swing a hot bat.

Freshman Dylan Floro pitched well for Fullerton giving up 3 runs (2 earned), striking out 8 but he also earned his first loss of the season. The Titan's 4 errors throughout the game did not help.

Up next for the Gophers will be the #3 seed, New Mexico. First pitch will be at 10:00 PM again and will be aired on ESPNU again.

Cal-State Fullerton must now do things the hard way if they want to win their regional. They will face #2 seed Stanford in an elimination game, followed by another elimination game against the New Mexico/Minnesota loser and they then must beat the NM/Minn winner twice.

The Golden Gophers have put Cal State Fullerton in a hole it may not be able to climb out of against a decent Fullerton Regional field. The Gophers received a stellar pitching performance from Seth Rosin and defeated the Titans 3-1 in opening-round action. The Gophers entered the season on the cusp of our rankings. You’re finding out why so far this weekend.