We did this for a few position groups last year and I wanted to get back to this as we begin to preview the upcoming Gopher football season. In the Upgrade/Downgrade previews we'll take a look at last year's major contributors and this year's expected contributors. Then it is up to you to decide if this is an upgrade or a downgrade (or neutral). 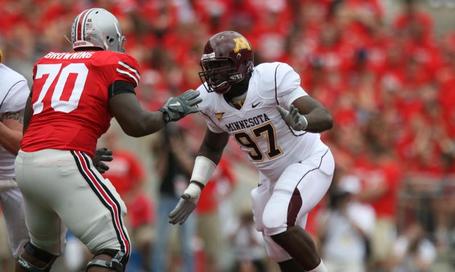 I'm going to start with the defensive ends as this is the position group I think I am most looking forward to watching this year. Defensive ends generally (this is very broad) have two key responsibilities. 1-contain plays, do not let the QB or RB get the edge and force everything back to the middle. 2-on passing plays they need to get pressure on the quarterback.

Last year's defensive ends were pretty good at holding the edge, but we really struggled to get the QB. The Gophers ranked 2nd to last in sacks last year which is a decent indicator of how well this group was able to pressure and bring down the opposing QB. Obviously within that number are also LB and DT sacks but for the purposes of this preview we can assume that our ends did not excel at sacking the QB. But of the 22 sacks the entire defense recorded the ends accounted for just 8.5 of them.

As far as helping with the run game, I believe this was an area of relative strength for out ends. Barrett Moen and Cedric McKinley were solid against the run. As a total unit the Gophers ranked 7th in the Big Ten for rushing yards allowed. Not spectacular but certainly good enough. The majority of the tackles were recorded by the linebackers and safeties but McKinley led all defensive linemen in tackles and one could argue that Moen led the team in taking up a blocker to allow the linebackers to make a play.

Enough said, let's get to who is gone and who is still here.

2009 defensive ends no long with the Gophers

McKinley was a beast and Moen was a consistent starter but they combined for just 2.5 sacks and 11 tackles for losses. Not exactly outstanding numbers for either of them. Henderson never lived up to what Gopher fans hoped he would be and his senior numbers is an obvious reminder. While I loved our defensive tackles in 2009, our ends were not the strength of the overall unit.

At the very least I am expecting this group will match last year's production. Jacobs, in limited time, has basically the same stats as Moen did. Moving from his sophomore to junior season and getting more downs (assuming he is a DE this year), I am going to assume that his numbers will improve and should be in the neighborhood of McKinley's 2009 production. The other end spot will likely be split between Wilhite and Hageman. Possibly Hageman on most running downs and Wilhite coming in as the pass rushing specialist.

The 2009 group was OK but seriously if I would have been given a blank sheet of paper and told that my life depended on writing down the 2009 Gopher 2-deep. I think I would have completely forgotten to put Moen's name down. Maybe that is an indictment on me or maybe he was just not memorable. I'd love to see his numbers up against every other end in the Big Ten who started all 13 games. He wasn't terrible and he rarely made a big play, making him anonymous.

The 2010 group you see above are all young. Jacobs is a junior, Wilhite is a sophomore and the rest obviously will be redshirt freshmen. Even with their lack of experience I think they will outperform the 2009 group of ends. Then entire group in 2009 totaled 8 sacks, we are returning 5 of those and I'm certain this group will hit double-digits this year.

There are some question marks here though. Clearly Wilhite and Garin are rather thin, can they hold up on 1st and 2nd down or 3rd and short against Big Ten linemen? Ra'Shede Hageman was a TE last year, can he make the transition to playing DE? We four of our top five players who are just starting their second year of Big Ten football, what kind of production can we realistically expect from them? Mistakes are going to be made but can they get better throughout the season? And 22 sacks in 2009 is pretty bad, can this group get to the QB on a more regular basis and get that sack total up around 30? Finally, if the sacks go up can these guys also keep the run game contained and get off blocks to bring backs down?

It is also possible that Jacobs will see more time at DT considering how thin that group is. If he moves inside then that changes the ends production, probably dramatically. For now I'm going to assume he starts at DE and maybe moves inside on passing downs.

Probably more talent but lots of questions. Will this position be an upgrade or a downgrade?