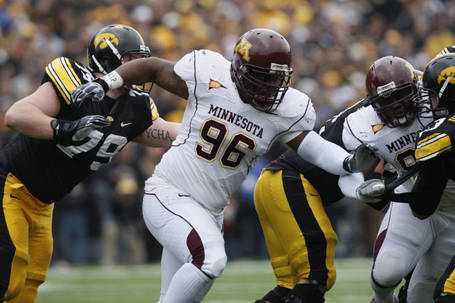 This 2009 group of defensive tackles was arguably the best unit on the defense and undoubtedly the deepest. Gone are the two starters, Eric Small and Garrett Brown. Replacing them will be their backups Jewhan Edwards and Brandon Kirksey (pictured right). So the good news is that this is how it should be. You have a couple of talented younger players who get a year to backup your experienced starters.

Small graduated after giving the Gophers three very good seasons. He started 31 games notching six sacks over that span after coming to Minnesota from Joliet JC. Garrett Brown was one of my favorite Gophers last year. He was very productive and a smart kid with a bright future. His non-football future will have to wait though as he was signed by the Kansas City Chiefs as an undrafted free agent. He'll be fighting the next few weeks for a roster spot in the NFL. He started 32 games as a Golden Gopher and during his senior year he recorded 35 tackles and one sack.

These two will be missed. They were good sized, talented and very experienced.

Backing them in 2009 were Edwards and Kirksey. They got a lot of snaps last year and are not by any stretch inexperienced. They also are good sized and talented. I am not worried about these guys. As juniors they should be ready to step into starting roles and are capable of producing as well as Brown and Small. Personally I'm very excited to watch these guys play this year and they are capable of having break-out seasons.

Assuming good health they will start all 13 games (yes I said 13) and should combine each have about 30 tackles with a few sacks. I think those are baseline numbers.

What worries me is our lack of depth at this position. It is likely that Anthony Jacobs will move to the inside in certain situations. But after that we have lightly recruited players who have no experience at this level. This is what concerns me about our interior line.

These are our only scholarship tackles on the roster and notice that they are true freshmen. They may end up being good football players, but as our primary backups in the middle of our defense, this is an area of concern.

I like our starters a lot (I really do) but overall I think this group has to be considered a downgrade.