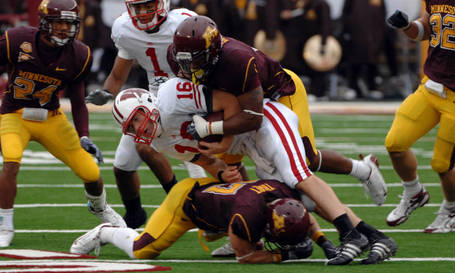 This is where things get interesting for your 2010 Golden Gophers. It is my personal opinion that our ends are an upgrade and our tackles are an overall downgrade. This position group is up for some debate.

Your more optimistic Gopher fans hope that this is a perfect example of good recruiting and because of that we aren't rebuilding we are reloading. Others will hold the position that you cannot replace what we had last year and regardless of talent this is going to be a rough year for our linebacker corp.

Let's first take a look at what we lost. Here is the quick synopsis...all three starters are gone, all three starters were in the top four for Gopher tacklers and all three starters combined to AVERAGE 103 tackles, 8 TFL, 1 sack, 1 INT and nearly 1.5 fumble recoveries. All three were either drafted or signed a FA contract with an NFL team and are fighting to make a roster right now. Those loses are significant.

These guys were also leaders on the Gopher defense and were very good at playing within their responsibilities. Campbell had a nose for the ball and contact. Simoni was an athletic LB who did a nice job in coverage. And Triplett took huge steps from his junior to senior year and really anchored the strongside and accounted for four turnovers. There is no doubt this was our best LB corp in a very long time.

But I'm not here to look back as much as I'm here to look ahead. Replacing the departed seniors will be a two guys who saw regular playing time last year and then open competition for the remaining spot and second unit.

The weakside LB should be filled by Keanon Cooper. Cooper saw action in all 13 games last year and had a solid year as a backup. As a redshirt freshman he accounted for 43 tackles, 1 sack and 2.5 TFLs. Those are solid numbers and in his sophomore season much is expected of him. He not only needs to take a step forward in production but one would expect he will also need to step into a leadership role. Behind Cooper will likely be redshirt freshman, Aaron Hill. Hill is a walk-on who had an impressive spring and reportedly was pushing Cooper for the starting spot. I'd be very surprised if he supplanted Cooper as numero uno on the depth chart but he will likely be a contributor.

MLB should also be a fairly easy fill. Gary Tinsley saw action last year and assuming he is eligible he will likely be our starting MLB for the season. He finished the season strong and recorded 10 tackles in the Iowa game. This may be a breakout season for Tinsley. He is good sized, strong and is well suited to play MLB in the Big Ten. Backing up Tinsley will probably be redshirt freshman Brent Singleton.

On the strongside is very likely going to be a competition between Spencer Reeves and Mike Rallis. Rallis is a converted safety who may fit the mold but the sophomore is inexperienced with the position and probably needs to put on some bulk. He always seemed to be around the ball in the spring game and was arguably the defensive MVP of the game. Reeves is a third year sophomore who has been waiting for his chance to take this spot over. The Skyline native recorded a whopping 160 tackles as a high school senior and Gopher fans hope his nose for the ball will shine through in 2010. He is a talented player who needs to take advantage of this opportunity.

So our 2010 linebacker depth chart should look something like this...

Also likely to be in the mix for playing time will be Ryan Grant and Patrick Sveum. Grant is a sophomore out of Eden Prairie, Sveum is a walk-on senior from Rochester. I do not expect either to consistently be in the two-deep but I'm sure they'll see some snaps.

We also have a handful of true freshmen on the roster. Dwayne Mitchell is a 6-2, 220 MLB type out of New Orleans who was one of my favorite 2010 recruits. Willie Tatum is 6-0, 200 and is a fast OLB out of Ohio. It is possible that they fight their way on to the two-deep but both would greatly benefit from a redshirt year.

Overall this is another group of gifted athletes who are certainly capable of individually having very good careers. Tinsley, Cooper, Reeves and even Rallis are strong kids with above average speed. They are capable of dropping into coverage and handling TEs or backs out of the backfield. They are capable of stringing out running plays or sticking their nose in the middle and bringing kids down for short gains.

My vote is going to be that this group is a downgrade. I realize it is the preseason when everyone believes that all 22 starters are going to take big steps forward and out-produce their predecessors. But I just don't think that will be the reality this year. Much like the DTs, I like this set of starters and the freshmen make me very nervous. Cooper is on my short list of guys who I think will have breakout seasons. And this group in 2011 could be very good after a year of seasoning in 2010. But we are talking about right now and my vote has to be downgrade.