Where I Came From: Memorable Moments

Share All sharing options for: Where I Came From: Memorable Moments

This post is sponsored by EA Sports NCAA Football 2011 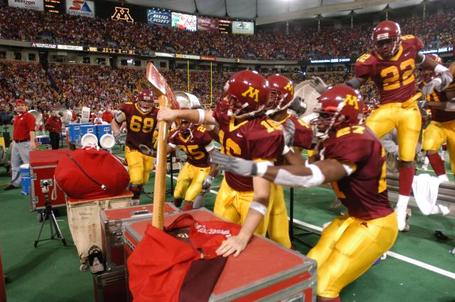 I hate to be a downer here but when I hear the term memorable moments, as a Gopher fan, some painfully memorable moments are the ones that come to mind. The 2003 Michigan game, 2005 Wisconsin blocked punt debacle, 2006 Mason's signature Texas Tech loss, the Northwestern hailmary, I could go on but I won't. Instead of reliving those "memorable moments" let's be a bit more upbeat on this beautiful Friday morning.

If this were a basketball post the 1996-97 team would be the clear-cut winner. I could even narrow that team/season down to one exact moment. As you may recall the UCLA game was the regional championship. The Bruins were the 2-seed and the game was close throughout. About mid-way through the second half the Gophers had the bulk of their starting line-up on the bench while the second string guys started to push the lead a little bit. As the lead was growing the entire Gopher starting lineup checked back into the game and you could see the collective UCLA roster drop their heads as they knew it was now over. Toby Bailey, Cameron Dollar and Charles O'Bannon knew at that moment their Final Four dreams were over. And it was at that moment I knew the Gophers were heading to the Final Four.

But EA isn't sponsoring a basketball post, this is supposed to by my favorite Gopher football moment. It isn't quite at the level of making a Final Four or winning the Big Ten. In fact it is kind of sad that a simple rivalry trophy win is my most memorable moment over the last 20+ years. But this game meant a lot, it was dramatic, it was over a rival and I happened to be in attendance.

My personal Gopher football most memorable moment is easily the 2003 win over Wisconsin.

This was a classic, hard-fought, back-and-forth game that came down to who had the ball last (can I put more cliche's into one sentence?). Marion Barber had 139 and a TD, Laurence Maroney rushed for 135 and TD, and the Gophers had to win with back-up QB Benji Kamrath as Asad Abdul-Khaliq went down in the first half. Wisconsin on the other hand struggled to run the ball but Jim Sorgi threw for 305 yards and 4 TDs. 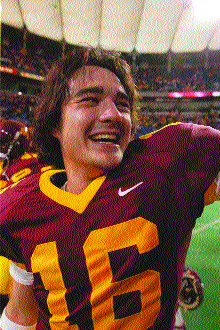 Wisconsin was previously a ranked team and came into the game with a decent rush defense that had been allowing just 97.8 yards per game on the ground. Barber and Maroney never seemed to mind those kind of stats as they led the way to a 336 yard rushing day for the Gophers. The Gophers scored the game's opening TD in less than a minute on a Maroney 30-yd TD and scored in the last minute to seal it with a Rhys Lloyd 34 yard field goal.

The final drive started on the Minnesota 20, game tied, 2:49 on the clock. The great running game is well known but Benji Kamrath under center wasn't the most ideal situation. But Kamrath completed passes on back-to-back third downs including a 23 yard pass on 3rd and 9 from our own 33. After that Barber took over and the Gophers marched down to the Badger 19 before it was Lloyd's turn.

"Don't forget to get the Axe," Mason said, referring to Paul Bunyan's Axe, which sat on Wisconsin's sideline.

As time expired, Lloyd nailed the FG and sprinted to the Badger sideline to bring the Axe home. The Gophers then circled the Metrodome allowing Gopher fans to touch the Axe before it was eventually placed in the trophy case.

You can watch the video of the gamewinning kick here.

That my friends was a great game and probably my most memorable Golden Gopher moment (FOR NOW).