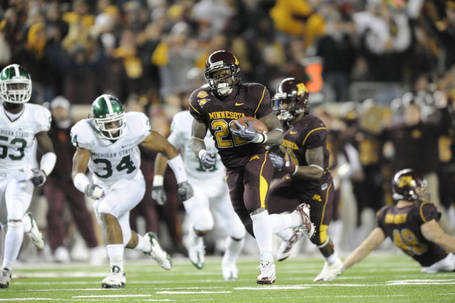 Now that the defense is finished, let's move on to the offense. I'll hold off on the more controversial positions and start with running backs. It really wasn't very long ago that the Gopher rushing attack wasn't just the most feared ground game in the Big Ten, but it was one of the best in the country. After two consecutive years of being the worst ground game in the conference can the Gophers get back to respectability on the ground and ease the burden on the rest of the offense?

The mantra of 2009 was "Pound the Rock." This was after a 2008 campaign where the Gophers finished last in the Big Ten in rushing. When asked about establishing an offensive identity, Brewster had this to say...

"We know exactly what our identity is. That's been established, so we're not trying to form an identity as practice starts. We know we're going to run the football. If we run the football we'll be successful. That's something that we're going to make a concerted effort to do. It is who we are. The change of [offensive coordinator] has had no effect at all-it's been a seamless transition-a very similar offense, less is more. I feel really good about that point-about who we are from an identity standpoint."

I don't really believe that an identity has been formed on offense. For various reasons the Pound the Rock emphasis never really played out as the Gopher offense actually had fewer carries in 2009 and that resulted in fewer yards.

There were three causes for this really. The offensive line failed to really establish the ground game. The offensive coordinator never really committed to running the ball. And none of the running backs established themselves as the workhorse back the offense could rely on. This isn't meant to be a diatribe on the state of our rushing game and offensive identity, but today's STrib article on Matt Carufel on the OL says the Gophers are REALLY emphasizing the run so far this fall.

He (Carufel) estimated the Gophers have devoted "90 percent of our time so far" to running the ball, which is fine with the linemen.

"This is what we came here to do. Running 50 times a game appeals to us," said right tackle Jeff Wills. "It's a lot more fun to put your hands on the defense and drive them to the ground."

The lack of having a feature back on the 2008 and 2009 rosters has hurt the Gophers ability to really be a threat to run the ball. There were basically three running backs who carried the ball for the Gophers in 2009. All had eerily similar numbers.

The good news is that Bennett and Eskridge will be back for their junior seasons. Kevin Whaley is the only one not returning after a solid, though uninspiring freshman season. Following the Insight Bowl loss, Whaley ran into trouble at a Scottsdale nightclub and was soon thereafter released from his scholarship. As a freshman Whaley did average the most yards per carry and had basically the same total yards as Bennett in two fewer games. He showed some promise but his skill set wasn't special enough to put up with multiple run-ins with the law. Do he is no longer a Golden Gopher.

What is no longer here was easy, what is here for 2010 is split into two categories. Those returning and the new blood coming into the program.

Returning is obviously Bennett and Eskridge. Bennett was granted a medical redshirt in 2008 after injuring his knee in the second game of the year. 2009 was his first year back after the ACL rehab and he had an OK season. As you can see above he received slightly more than a 1/3 of the carries and led the team in rushing yards and TDs. He also caught 16 balls for 194 yards and 2 TDs. If you want to give Bennett the benefit of the doubt and assume that 2009 was a year spent getting over the mental and physical rehab of his knee, then maybe he grows into the workhorse back for the Gophers this year. In my opinion Bennett does everything OK, but nothing great.

Eskridge is also a solid back who started 9 games in his two-year Gopher career. Eskridge has pretty good speed but he doesn't have that burst that gets him to top speed quickly. In my opinion he is is best when he can get the ball out in the flat, make one guy miss and then have some room to get to top speed. With that said he only caught only 3 passes last year so he wasn't exactly used in this manner. To his credit he did score the first Gopher touchdown in TCF Bank Stadium. I like Eskridge, but I'm not convinced he is your everydown back as he does not excel at running between the tackles.

Incoming we have three promising freshmen. Gopher fans are excited and extremely hopeful that one of them steps up to establish themselves as your Gopher back of 2010 and the future.

Lamonte Edwards is the biggest of the three incoming backs and he is the local kid who Gopher fans hope bring back memories of another big, local back who dominated the Gopher ground game for a few years. Asking Edwards to fill the shoulder pads of Marion Barber may not be fair but I am certainly looking forward to seeing Edwards as a Golden Gopher. The thing that makes Edwards stand out is his size. A true freshman back who comes in at 6-2, 215 and although he isn't blazing fast he does possess good speed. Physically he appears to be Big Ten ready and this is one of the few positions a true freshman can step into and play. This is me guessing but if I had to pick one of the freshmen who will contribute the most this year, it would be Edwards.

Donnell Kirkwood comes to the Gophers from Florida and had offers from Kansas State, Pitt and Rutgers. Kirkwood is described as a compact, powerful back who should excel between the tackles. Also not the fastest back in the class but he is a Big Ten type running back who should able to get those tough yards and maybe able to deliver some blows on his own. He is certainly capable of being the workhorse back in this offense down the road.

Devon Wright is also from Florida and over his high school career, in the talent rich Broward County, he put up some impressive numbers. In his three year high school career Wright rushed for over 4,700 yards and 48 touchdowns! Wright is more of a slasher with big play ability who is also adept at receiving out of the backfield.

All three of these backs seem to have skill sets that compliment each other well. They will be fun to watch over the next few years and possibly as soon as this year.

Overall this is one position that I think is a clear upgrade. Bennett is back and should have all of his ACL issues behind him. Eskridge is back with another year of experience and added strength. Then you bring in a very nice set of freshman backs, all of whom may have very nice Gopher careers. Declaring this group an upgrade is one thing, seeing actual improvement of production on the field is another. Averaging just under 100 yards per game will not be acceptable this year so the answer to the upgrade/downgrade question should be easily answered by years' end.