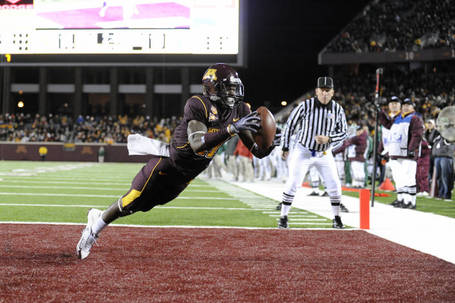 If we are only trying to answer the question as to whether or not this position group is an upgrade or a downgrade then this should be a pretty quick post (and might not meet the SBN required 75 word minimum). When you lose a guy like Eric Decker and you don't replace him with another All-American caliber receiver then this is a going to be a downgrade. And let's not forget that we have also lost our second leading receiver, Nick Tow-Arnett. Together the two combined for 43.7% of the team's receptions, 47% of the 2009 yards and 53.3% of the team's touchdowns. Those are big numbers when we are talking about just two guys.

Eric Decker was a joy to watch play for the Gophers. He was tough, he was extremely productive and represented the Gophers very well. I look forward to watching him play on Sunday's. He was the one offensive player we have had that defenses feared. And most impressively, defenses game planned to stop him but they rarely did. Not much needs to be said of the best receiver to wear a Gopher uniform. He holds or nearly holds every major receiver record and he missed 6 games over his last two seasons.

Nick Tow-Arnett was second on the team in receptions and always seemed to come through when he was needed most. His 8 receptions, 81 yards and 2 TDs against Michigan State was easily his most productive game as a senior and it was when the passing game needed him most. This was obviously the first game with Decker. And one of my favorite plays of the season was when the Gophers were trailing late in the third to Air Force. On 3rd and 25, Weber and Nick Tow-Arnett hooked up for a 25 yard first down. He seemed to come up with big third down catch after big third down catch. He was one of the quiet heroes of the 2009 Gopher season.

The good news is that everyone else returns, the bad news is that our three leading returning receivers average just 21 catches, 303 yards and 1 touchdown apiece. And our most productive returning tight end? He is returning his one catch for 12 yards. The numbers are not inspiring but that doesn't mean all hope is lost.

Da'Jon McKnight is a big target who also happens to be very athletic. His returning 17 catches and 311 yards isn't impressive but there is anticipation for his junior season for two big reasons. First of all, he recorded all of his 2009 stats after Decker went down for the season. When looking at his numbers in that light, knowing it was all in just 5 games, there is reason for optimism. Secondly it is rather important to note that Mcknight didn't even begin playing football until his senior year in high school. He is big, he is fast and he has steadily improved throughout his career. If anyone is going to step up and be the go-to receiver McKnight is capable of doing it.

Troy Stoudermire is the team's leading returner in touchdowns and receptions. Stoudermire is the big play receiver who really is capable of getting the ball out in space and taking it for 6. He is a dangerous kick returner and I expect the Gopher offense will make quite an effort to get the ball in Stoudermire's hands often. The very first play of the spring game was an end-around to Stoudermire. Not that he'll touch the ball every-other play, but I think it shows that the Horton offense will get the ball in Troy's hands on a more regular basis.

Brandon Green is the other receiver in this assumed top three. Green was a four-star receiver coming out of high school and this is the year he hopefully breaks out and starts putting up some more impressive numbers. He is a solid route runner and he has good hands. My biggest complaint with Green is that he has trouble getting separation from DBs and isn't as open as he could be. 21 catches in each of his first two seasons is pretty good but I'd love to see him above 40 catches this year and really establish himself as a reliable play-maker in the passing game. He is certainly capable.

Other returning receivers are Hayo Carpenter and Bryant Allen. Hayo came in with some hype last year as a four-star incoming JUCO. The hope was that he'd be a perfect compliment to Decker last year but that never materialized. He finished the year with 2 catches and 43 yards in 10 games. I don't know that he'll be super productive but he needs to give us more than 2 catches this year. You can see he has some explosiveness to him, but it needs to show up on the field. Bryant Allen had a solid freshman season and he also has some obvious explosiveness to him. His biggest contribution was as punt returner but he also caught 5 passes while seeing action in all 12 games as a true freshman. He is recovering from injury and may not be full speed when the season starts.

Back to the tight ends for a moment. As mentioned Eric Lair is the team's leading returner at this position with one catch. But don't let that be too discouraging. Tow-Arnett went from 10 catches in his junior year to 37 as a senior when given more opportunities. Lair is a big and very athletic tight end who figures to play a big role in the passing game. I think you'll conservatively see him get 25+ catches this year. Just based on tight ends I think we may be upgrading, and that is with all kinds of respect for Nick Tow-Arnett. The other tight end you'll see a lot of on the field is giant JUCO transfer, Tiree Eure. At 6-7, 255 Eure is supposed to be a very good blocker who also is a good receiver. I am always most comfortable with a JUCO who spent the spring in Minnesota learning the offense and working out with the team.

When you lose Decker and a reliable tight end like Tow-Arnett, this has to be viewed as a downgrade. In the Gopher's case you are luck to have a handful of talented players who are set to step up and fill the vacancy with the sum of their parts. I am looking forward to this year's passing attack and different receiving options we have.