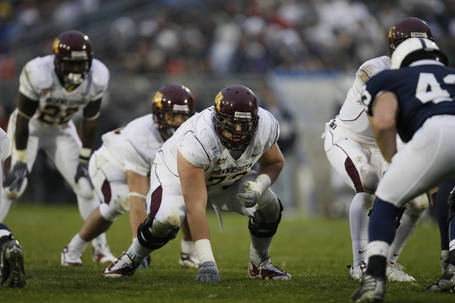 So now it gets interesting. The offensive line was often blamed for all of the offensive woes in 2009. In some cases this was justifiable but to hang all of the 2009 problems on them is completely unfair. But this was a much maligned group and for better or worse they are mostly all back.

Gone is tackle, Matt Stommes (4 starts) and center Jeff Tow-Arnett (5 starts before injury). These are the only two offensive linemen who saw any significant time last year who were seniors.

Stommes was a converted DT to OT for his last two seasons. He started four games in 2009 and was OK before Dom Alford took over for the rest of the season. Big guy, added solid depth but never stood out enough that he is going to be missed. Jeff Tow-Arnett was a solid Big Ten center and unfortunately went down with a broken leg. He was solid but considering he missed 8 games last year I find it hard to justify calling this a huge loss as well.

So that leaves us with a number of others returning. This is another case of good news / bad news. The offensive line allowed a lot of sacks in 2009, contributed to the worst rushing offense in the Big Ten and also got their numbers announced because of too many penalties. But all of that was last year, it is a new year and there is some optimism with this group in 2010 (some optimism).

Let's take a look at what projects to be the starting 2-deep offensive line...

Were I writing this a week ago it would look a little different but it appears as though your starting LT is going to be a redshirt freshman. Ed Olson came into camp with the assumption that he'd make a push to start at LG, but surprisingly he has asserted himself and all signs are pointing that from here on out it is his job to lose. He has put on nearly 20 lbs since last year and I think it is a fair assumption that a full year of strength training has made his young body more ready for Big Ten play in the trenches than it was a year ago. There is always some concern about starting a freshman (even a redshirt freshman) along the OL, especially at LT. But to be honest we got pretty weak play out of LT last year, regardless of who was in there, and if Olson is beating out the guy who started the last 8 games at LT then I'm OK with calling this spot an upgrade.

LG was anchored last year by Chris Bunders who started all 13 games. Bunders was never a headline grabber last year. His name was never mentioned as a standout along the line and he was also never blamed for the woes of the line (he was responsible for the chop block vs. Wisconsin 1st and goal on the 1, but I don't hold on to those kinds of grudges). There is room for improvement and the hope is that a full year of starting and heading into his junior season he'll take a step or two in his development. He was just a sophomore last year, I expect more this year.

Center should be manned by D.J. Burris who was thrown into action last year for the final 7 games when Jeff Tow-Arnett broke his leg. Burris has started 27 games over his Gopher career at both guard and center. He put on 15 pounds in the offseason and he was able to record some valuable experience starting last year.

Right guard is certain to be manned by Matt Carufel. By now we all know his path to the Gophers from CDH to ND to MN. Carufel sat out 2008 and was a solid starter at RG in 2009 missing just 2 games due to an illness and a minor injury. He is good sized, strong and most importantly it is being reported that he has a bit of a nasty streak to him. Carufel is probably our best offensive lineman and if there is anybody on the offense who has a chance to work their way into an All-Big Ten team he would be the one. He never seemed to dominate his position last year but there is talk this fall that he is healthier and playing at a higher level. I have high expectations out of our RG this year.

Finally we get to RT and the massive Jeff Wills who started all 13 games at RT in 2009. At 6-7, 350 Wills is easily our largest lineman and he was the biggest target of criticism in 2009. Unfortunately for Wills had too many plays where he was beat by a speedy edger rusher and it was out there for everyone to see. Wills' size makes him a pretty good run blocker and he is able to clear some space; this part of his game is underrated. But he does not have the quickest feet and speedy defensive ends have been a problem for him. The 2009 roster has him listed at 365 and supposedly he is down 15 pounds this year. Is that plus another year to work on footwork enough to make him a better pass blocker? We will see. I assume that he'll be better but there is no guarantee of that.

If Wills struggles, the first guy ready to replace him will be Dom Alford who started 9 games last year, mostly at LT. There is a little bit of a position battle at RT this year and it is possible that Alford will get the start here but not likely. Alford is experienced and has 19 career starts under his belt. Should anything happen to Wills or if Wills struggles, Alford is capable of stepping in and performing at a starters level. I have him listed above as backing up RT, but I wouldn't be too shocked if he would also be the fallback option at LT as well.

Brooks Michel is listed above as the #2 LT and he is a future tackle for your Golden Gophers. Even as a true freshman last year there was talk that this kid has a very bright future. He has very good size, he's had a year to add strength and I'm sure he'll be a major contributor in 2011. I'm sure he's ready to go if given the opportunity and he'll see some action in 2010, but I'm not counting on a much from the redshirt freshman.

Ryan Orton is very likely your primary reserve at either guard. He started six games as a freshman and one game last year as as sophomore. Zach Mottla is also in the mix as a back-up guard but here again if either Carufel or Bunders gets injured, I think you'd see Orton as the option.

The backup at center is most likely Ryan Wynn. He started all 13 games as a freshman before missing 2010 due to injury. It is hard to gauge how effective he is or will be considering he hasn't played since 2008.

This may be the deepest OL we have had in some time. It isn't full of all conference players but we have some capable reserves who have some good experience. This should be an upgrade over last year based mostly on experience, returning starters and a year of development. I'm taking the Olson move to starter as a sign that he is better than Alford. I'm going to assume that losing 15 pounds will make Wills better. And I am going to assume that Carufel is healthier and primed for a really big year. Burris and Bunders are unknown but I'm comfortable that they'll be able to hold their own. And I think our reserves of Alford, Orton and Wynn are solid. To be honest I think this is a big year for OL coach Tim Davis to prove his worth as a position coach. He can recruit, I think he can motivate but if he can mold these guys into a much improved unit then I think he shows us a lot as a position coach.

This group has a lot of room for improvement from 2009 and I'm not expecting to have an elite unit but I do think we'll be better.