Gopher Basketball gets a jumpstart on the season

Share All sharing options for: Gopher Basketball gets a jumpstart on the season 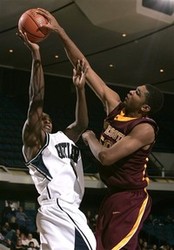 I know it is football season and basketball doesn't really begin for a few more months but this year the Gophers are getting to work early. Tubby and the boys will be heading to Canada soon for a pre-pre-season set of games and because of this trip they get to start practicing early. This is really a blessing for the 2010-11 Gophers who have a lot of young guys on the roster. To get an extra couple weeks to teach them the fundamentals of Tubby's systems and then the chance to put those to use in a game situation is invaluable. When they practice for real in October just think how much further along these freshman will be compared to freshmen around the Big Ten.

As part of the kickoff the media was allowed to come and watch a portion of practice and then interview Tubby / players. Here are my observations from the practice.

That is our top 7 and the ones I am secure with. After that the question is who is our 8th and possibly 9th guy(s)?

There are plenty of questions to be answered so having a couple weeks to practice and play before the real season begins in October is a blessing for this team.