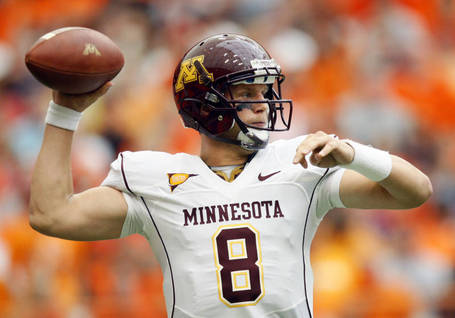 And we finally get to the one position on the Gopher depth chart that will divide Gopher fans and ignite passion like no other position. Like it or not the quarterback depth chart is going to remain exactly the same as it was a year ago at this time. Much like the offensive line it probably cannot get much worse so this position almost has to be an upgrade by default right?

You be the judge.

Your 2010 starting QB for the fourth consecutive year is going to be Adam Weber. While not technically true, Weber has basically taken every snap for the last three years and holds (or almost holds) nearly every passing record in the Gopher books. There are many who were ready for the Weber era to end sometime early last season, but Brewster stuck with his QB and with the exception of the Michigan State game Weber struggled through the entire 2009 season.

In three full seasons Weber is your program leader in yards, completions, attempts and (brace yourself Gophers fans) completion percentage. I know that one of his biggest criticisms is that he isn't very accurate. But he has by far the most attempts and currently has completed passes at a higher rate than any other Gopher QB in the program's history. He is very near the program's leader in touchdown passes and interceptions. Statistically he has a lot of very good numbers and that is including his freshman season when he was leading a 1-11 team. In addition to his numbers he is the unquestioned leader of this team.

I know many Gopher fans want to see more (or want to see QB2) but Weber brings a lot to the table and he should be poised for a senior season that will be much stronger than his junior season. I'm not here to write an apologist essay on the virtues of Adam Weber, I'm not here to type out the list of excuses why he wasn't able to succeed last year and I'm not here to make any bold predictions for Weber's 2010 season. I think we all want to see more, specifically in the win column and in his ability to keep his offense on the field.

After Weber is one of the Gopher's exciting, young, four-star recruits who threw 2 touchdown passes in 2009. MarQueis Gray? No I'm talking about Jimmy Gjere. OK, Gjere isn't your guy under center but he did throw more TD passes in 2009 than your REAL back-up QB.

If Weber is not able to exercise the demons of 2009 or if he goes down to injury your next Gopher QB will be the much anticipated MarQueis Gray. The former four-star recruit saw some action under center last season but was usually not allowed to throw the ball. The Jedd Fisch (Mulligan) Offense often used Gray in the Wildcat gopher formation allowing him to make plays with the ball in his hands. In the air Gray was 6/15 with 1 interception. On the ground he accounted for 265 yards (5.6 yd average). He also started the Insight Bowl as a wide receiver and that is where you will see him most often this season.

As a QB he was unable to beat out Weber this spring as the starting job was reportedly open to competition. Most believe that the job was Weber's to lose and Gray would have to significantly outplay him to win the starting job. But at least publicly the job was up for grabs. Gray is incredibly talented and is dangerous whenever he has the ball in his hands. Watching him closely in the spring game and the fall scrimmage decision making and accuracy are the obstacles he has to overcome. And by accuracy issues I mean balls that are just not catchable. But what he may lack as a passer he would clearly make up with his legs. Nobody doubts that he'll be able to move the chains with his legs. When he does take the snaps as your Gopher QB it will be exciting to see what he brings. That will likely be in 2011. He'll get to be QB1 in 2010 if Weber is injured or continues to regress to a point where he is doing far more harm than good.

After Gray your third string QB is Moses Alipate. The redshirt freshman from Bloomington has the size and tools to be a very good QB in this system. In the spring game Alipate looked the part and some murmurs in the pressbox wondered if he'd make a push to be the #2 QB this fall. But that never materialized and in the fall scrimmage he didn't have quite the same command. At 6-5 and 235 pounds, Alipate is a big pocket passer. He is talented and may push Gray in this coming Spring, especially if Gray is wildly successful as a receiver. In the end, if Brewster is still coaching this team in 2011 I think that Gray will be your starting QB but that preview is for another day. In 2010 you won't likely see Alipate on the field.

If this position is a downgrade then it will begin a new era in Gopher football. My vote here is upgrade. Kind of like the offensive line, it just has to be an upgrade doesn't it? With a stronger line, a simplified playbook, an OC who has a knack for working with QBs, a stronger running game and a year to fume about his last 13 games Adam Weber just has to be better. He doesn't have to be significantly better, but he has to be better.