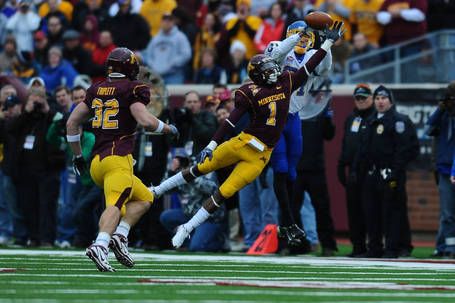 And we now get to the position group that has me most concerned heading into 2010.

Gone are Marcus Sherels and Traye Simmons who were two year starters and who gave the Gopher defensive backfield a pair of reliable corners for the first time in years. Like our 2009 linebackers, both of these guys are currently fighting for a roster spot with NFL teams. Sherels is down in Mankato trying to be a Viking and Simmons signed with San Diego hoping he'll end up on their roster in September.

Sherels and Simmons were significant upgrades and largely contributed to the Gopher pass defense moving from among the Big Ten's worst to very respectable. Below you can see the pass defense numbers and Big Ten rank from 2007 when Sherels was a walk-on WR and Simmons was in the JUCO ranks, to their senior year in 2009.

Obviously two corners are not entirely responsible for the overall pass defense, but they are critical and responsible for the two biggest receiving threats that an opposing offense has to offer. Safeties provide support, linebackers cover tight ends and backs out of the backfield; but the corners are key. Not having guys who can cover exposes your pass defense in ways that makes it incredibly difficult for the rest of the defense to make up the difference.

Looking at those numbers the Gopher pass defense gave up 50 fewer yards in their first year starting and then another 23 yards as seniors. Think those guys were valuable?

Moving into 2010 your starting corners will be the two guys who saw plenty of action backing up Sherels and Simmons. The biggest name is sophomore, Michael Carter. We all know by now that Carter is a cousin to former Gopher great, Tyrone Carter. And Gopher Nation is hoping that Michael will live up to his surname. In 2009 Carter was a true freshman and worked his way on to the field as a backup corner and occasionally nickelback. He ended up with 2 starts, 11 tackles and 2 pass breakups. Heading into his sophomore season he has put on 20 lbs and is the clear-cut #1 corner on the Gopher defense. The overall success of the Gopher pass defense isn't all on Carter's shoulders but him stepping up this year would go a long way towards not having a dropoff in production from 2009.

CB#2 is very likely going to be Ryan Collado. The senior is the Gopher's most experienced corner. As a freshman Collado started nine games and has seen action in every game throughout his career. He is a very good tackler from the outside but has been on the wrong end of too many highlight touchdowns. His cover skills need to improve, but Gopher fans should take some comfort in having some experience at this position.

After those two guys nobody is really sure who will see the most time as corners. JUCO transfer, Christyn Lewis came into the program this spring and was expected to play corner but then he spent most of the spring game playing safety. At the time both Royston and Theret were not able to play so this may have been for depth reasons. On the official depth chart he may be a backup safety but my guess is that Lewis will be the Gopher nickelback who may see action as a corner.

Next we get to a couple of true freshman. A native of Florida, Tyrone Bouie is a physical corner and has the size to play right away. Ideally he would redshirt but this year's cornerback group is rather thin and he may be forced into action early. Brock Vereen is also potentially a corner who may have to play in his freshman season. He has very good speed and could be ready to play this year in certain situations. With a true freshman it is so hard to gauge how ready he will or will not be but these guys may have to see some time on the field this fall.

Johnnie Johnson is a junior and has primarily contributed on special teams but may be needed at corner this year. At the very least he has experience. Kyle Henderson is an under the radar guy who has very good speed and has been in the program for a year following a transfer from Mankato State. I doubt he'll be an answer but you never know.

Overall, I would once again vote that this group is a downgrade. I know we have a number of young guys who are capable of stepping up and making this group stronger, but I'm not going to let pre-season optimism get in the way of what is likely going to be a thin, inexperienced 2010 set of corners. Carter is one of my picks to have a breakout year and he has all-Big Ten potential. I have very few concerns about him, but he can't do it alone. Collado has yet to prove he can cover Big Ten receivers and the rest of this group are completely unproven. Carter alone may be better than anything we had last year, but as a whole group this is a downgrade. Much like the rest of our defense I think our starters will be fine, I love that some young guys will get some real experience this year and we should be much better in 2011.