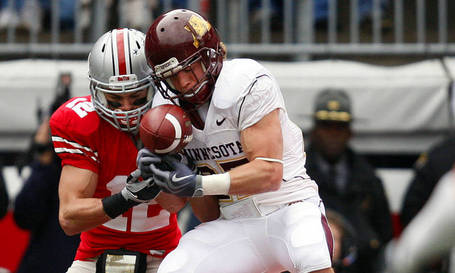 And the final defensive positional preview. This is the one position we believed would be solid coming into the season. Both starting safeties from 2009 were supposed to be entering 2010 as our only two returning starters on the defense. Kim Royston transferred back to Minnesota from Wisconsin and started all 13 games as a junior. And Kyle Theret has started 32 games, appeared in 38 and is currently 6th on the Gopher all-time list of interceptions. Should be solid for 2010 right? Um, not so fast my friend.

Kim Royston suffered a compound fracture and Mr. Theret ran into some disciplinary issues, both this past spring. Royston may or may not be 100% ready to go o September 2nd and Theret may still be facing a suspension. Nothing is ever easy for Gopher fans, the one position we were most confident in is the one that is rather concerning to start the year.

Let's take a look who should be the returning starters followed by their likely backups (or game 1 starters if they are unable or not allowed to play).

Kyle Theret was a late addition to the 2007 recruiting class. You may remember that this class was mostly made up of Mason recruits and Brewster had several weeks to get a few guys of his own. Theret was teammates with Brewster's son at Mullen High School and the two-star safety accepted what was reportedly his only D1 scholarship offer. Turns out this was a steal as Theret has started 32 games, has recorded 190 tackles, has 9 interceptions, 14 pass breakups and 7 tackles for loss. Not bad for a two-star recruit with no BCS offers. Theret is not your fastest safety in the conference and he's not all that big. But he is always in position and is a very good tackler. His experience and leadership are going to be invaluable this year in the secondary that is full of first and second year players.

Kim Royston took a different route to Minnesota. We all know that he committed to Wisconsin out of high school over several BCS offers. After a couple season where he felt he was not given a fair shot at starting, he transferred back to Minnesota and is playing without a scholarship for his last two years. He started every game as a Gopher and finished the season strong with a 15 tackle and one force fumble performance in the Insight Bowl. I believe he was poised to have a big season in the Gopher secondary but even if he comes back to play from injury who knows how it will affect his play. He has been practicing but his reps are being limited. I wouldn't be surprised if he is not starting at Middle Tennessee State but by the USC game I anticipate you'll see him in the secondary.

After our starting seniors I expect you will see Christyn Lewis and Kenny Watkins as your next line of Gopher safeties.

Lewis is a JUCO transfer who was expected to provide some depth to the cornerbacks. But in the spring he saw most of his time as a safety and played very well in the spring game. Lewis has good size at 6-2, reportedly is a good leader and is a physical player. It should also be noted that Lewis blocked six kicks in this two years in the JUCO ranks. I am speculating that Lewis will be the likely starter at nickel back. With this corner background and having a couple years experience post high school, it just makes sense that if all are healthy he'd be the 5th DB to come onto the field in passing situations.

According to GI.com, in the Gopher's first practice Kenny Watkins was the starter at safety (pending Theret decision and Royston recovery). Watkins is a redshirt freshman out of Detroit and throughout the spring there have been rumors/comments that he has taken the necessary steps to be ready to compete in the Big Ten this fall. Watkins missed considerable playing time as a high school junior so he had a lot of ground to make up in the eyes of recruiting gurus and college coaches. He steadily moved up the rankings during his senior season and eventually chose the Gophers over and Indiana offer and a few MAC schools. Over the last year Watkins has put on about 20 pounds. His talent, speed and athleticism should be valuable to the secondary and him getting good playing time as a redshirt freshman should pay big dividends in the future.

Also in the mix for playing time may be Shady Salamon. The former running back moved to safety last fall before the Insight Bowl and has had the bowl practices and spring to acclimate to the secondary. Assuming Royston is healthy and Theret comes back sooner rather than later I doubt you'll see a whole lot of Shady. But he'll be in the mix.

So this group is hard to figure out. Assuming Royston is able to come back at the same level he was a year ago and Theret's pending suspension is light then this has to be an upgrade doesn't it? I don't know how to gauge this position, my vote is pending.